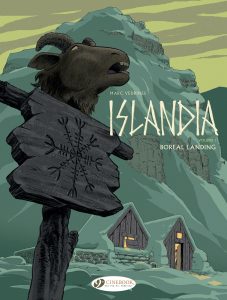 Fifteen-year-old Jacques has been living with his aunt and uncle. Although not poor, they’re struggling to live well and in order to make a living Jacques uncle must spend long periods at sea fishing in the North Atlantic. He’s keen to take Jacques with him but Jacques’ aunt wants a better life for the boy than the dangers of the open sea. Not that this appears to worry Jacques who feels drawn northwards, to Iceland, and so stows away on the ship.

Discovered, he finds himself caught up amongst a superstitious crew and curious goings-on, so when the blame falls upon him he has to take drastic action to preserve himself. Ultimately this brings him to the shores of Iceland, a land ruled over by the Danes, and to a people struggling to survive in such a bleak landscape. But there’s more going on here than meets the eye, not least Jacques’ ability to speak Icelandic and the pull he feels to travel further across the island. Some sort of sorcery appears to be at play and Jacques is in the middle of it.

Islandia is a perfect example of the possibilities of the comics medium. There may be money in superhero books, but there’s so much more, infinitely more, to explore as a storyteller. Marc Védrines has grabbed the bull by the horns (or should that be goat?) and plunged us into an icy world of Icelandic sorcery and survival, mixing an unusual setting with a mysterious tale that will keep you hooked throughout.

My first thought was that this book felt a lot like the brilliant Marquis of Anaon, but it’s not clear yet if this book is an exploration of irrational thought attempting to explain unusual events, or supernatural events taking the lead. Either way, it’s a great start. Védrines does an excellent job of both the writing and illustration. Moody, evocative and certainly a little dark, this is an intriguing conundrum I look forward to learning more about.

And if you liked that: Check out the Marquis of Anaon, also from Cinebook