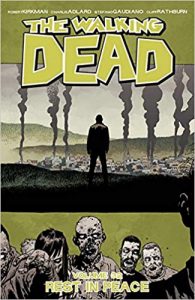 In a clever if not surprising move creators Kirkman and Adlard pulled the wool over the eyes of their readership and have ended the series. The subterfuge went as far as submitting fake future issues so that when the big moment did arrive you were presented with a genuine shock, something so lacking when just about all other content is telegraphed months in advance. Except it wasn’t a shock, because I don’t buy the comic – I read the collections, which I understand is how the majority of readers enjoy the story. So if any of those readers are like me then it was no surprise at all. The shock ending hit the news sites and the cat was out of the bag, with only the detail to be revealed. I’m also well aware that I’m now doing that all again, so there’s a possibility you missed the news the first time and now I’m spoiling it for you, so perhaps don’t go any further with this review. Just in case.

Rick’s been stumbling about within this new community for some time now, both amazed at their progression and stability and aghast at the manner in which they keep control. It’s a dangerous set of circumstances that will inevitably blow up, and it looks as if Rick will be the catalyst whether he wishes to be or not.

When that moment does arrive it happens much earlier in the book than I’d anticipated, which of course means there’s a twist or two to come, and what follows is a genuine, but perhaps necessary shock. There would be no coming back from this, despite the parallels with the TV show.

Personally, I found it a little too hurried and, if I’m honest, unsatisfactory, but for the life of me I’m not sure what the creators could have done to steer it another way. The series was in constant danger of repeating itself, the cast list had grown so large that it was often tricky to keep track of secondary characters, and every page turned was a step away from the apocalyptic disaster that kicked off this tale and a return to some sort of normality. With everyone so seemingly capable of dispatching the undead the zombies had ceased to be a palpable threat a very long time ago.

However, for Kirkman to acknowledge this and act upon it saves us all from diminishing returns (albeit not the case on the small screen) and although the ending may not have the gravitas and resolution the lead characters may deserve it is a definitive ending. It’s a book I’ve enjoyed consistently since the beginning, not least because of Adlard’s artwork once he took over after the first few issues. It may never have reached the 300 issues Kirkman had hoped for, but it’s undoubtedly secured its place in comics history as a classic of the medium.

And if you liked that: Charlie Adlard has a new project Vampire State Building. Should be worth a look.