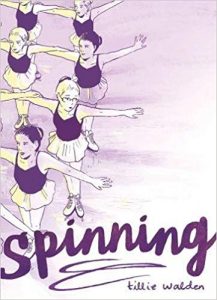 This one has sat on my shelf for some while. A story about a young girl and ice skating wasn’t convincing me it would hold my attention, so I’ve been forever passing it over for another book. That was until the evening before last.

Ice skating is at the heart of the book in this autobiographical tale, but it’s not the book’s theme. Rather it is a story about finding out who you are and the difficult path to get there, particularly when life is suggesting you go down a different route entirely. Tillie Walden is very honest and open about her early years, from incredibly early starts each morning where her parents were the only ones not staying to watch through to coping with her sexuality. There’s a lot of self analysis amongst the pages but it’s all thoughtful and patient in the telling, allowing the story to gently unfold as your admiration for Tillie grows. Even if her own self confidence appears to be constantly undermined.

There are two particular villains of the piece, each appearing at different times in her life to inflict some misery. Walden’s art is sparse and minimalist so it lends itself to the way she deals with these individuals – she simply doesn’t draw their faces. She deals with it well, utilising the frames and angles to obscure them or simply doesn’t feature their features. The result is a denial to them and their actions and perhaps a sense of satisfaction too.

As for the ice skating, Walden draws you in so effortlessly that you can’t help but take in the details of the jumps, competitions, training and general associated foibles of the sport. You’ll learn a lot. But it really could have been any out-of-school activity with a group of fellow students. What it demonstrates, as she grows older, is her coming of age, her exploration of her feelings and her ability to take stock of who she is and what she wants to be.

Quite beautifully done, Spinning had me hooked from the start. Will certainly look out for more of her work.

And if you liked that: Check out her book The End Of Summer. I will be.