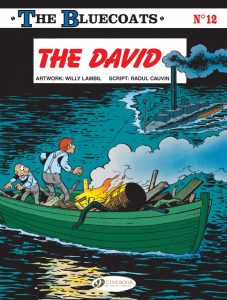 The Bluecoats always manages to trip me up slightly with my expectations. I think this is largely down to the disconnect between the playful cartoon style of the illustrations and the harsh reality that is war. Unlike an Asterix book, for example, when a Roman is launched several stories into the air and comes down on his head with little more than a black eye to show for it, The Bluecoats treats the nature of battles and bloodshed with a little more seriousness. Blutch resents his life constantly being in danger, and Chesterfield is often torn between acknowledging the situation and his sense of duty. For this reason I always seem to finish a Bluecoats book with a warm respect for its execution, as I did for this one.

The book opens with a blockade preventing the resupply of Charleston by ship, something that would no doubt turn the tide of the war if not for a secret confederate weapon that manages to take out enemy vessels and allow supplies to get through. The President and his generals are distressed by this turn of events but have no clue to the exact nature of the threat, so it’s decided to send two men deep into Confederate territory to gather information – an extremely risky endeavour. It just so happens that Blutch is at the end of his tether, no longer wishing to face the daily suicidal charges into the enemy’s guns, and so has opted instead for a stance of belligerence and insubordination that will result in the firing squad. Better that, he thinks, than another charge. Chesterfirld is beside himself in his attempts to talk Blutch round, eventually succeeding by persuading Blutch to sign up with him as a spy. A successful mission will see Chesterfield promoted and Blutch allowed to leave the cavalry.

Naturally things get off to a bad start when Chesterfield’s chosen cover for the pair of them causes more problems that it solves, but they do at least learn what is causing the blockading ships to be destroyed – a steam powered ocean-going craft that sits just beneath the waterline.

As is mentioned at the beginning of the book, this craft really did exist, but its effectiveness is debatable. Certainly ingenious, it was still a little ahead of its time, but for the purposes of the story its an excellent narrative device to build a story around.

And don’t let my earlier comments about the serious tone colour your judgement. This is a black comedy, so there are plenty of gags and humorous situations, not least the final page.

I’ve seen Bluecoats books in libraries and schools, which pleases me no end. If you’re not familiar with the books then now’s as good a time as any to start.

And if you liked that: More Bluecoats books at www.cinebook.com