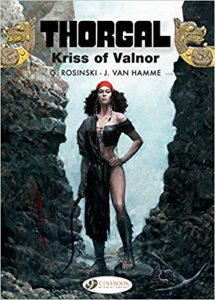 It could be argued that things don’t get as grim as they were at the end of the previous Thorgal episode. And yet, with our curiosity piqued Van Hamme conjures up another script to drive the migrant family’s fortunes forward.

Aaricia, Wolfcub and Jolan are slaves, albeit well looked after ones, but for Aaricia it’s a situation she can’t tolerate. Her refusal to stop seeking a means of escape sees the three of them sentenced to work in the silver mines, an altogether harder way to live. As difficult as their lives have now become the last person they expect to find there, whip in hand, is Kriss of Valnor, someone they long thought dead.

Meanwhile a galley returns to the island where Thorgal’s body was left on a hilltop so two members of the Roman elite can get some satisfaction after Thorgal killed their sons. Except there’s no body, but equally there’s no clear means of escape from the island. The soldiers are challenged to find him and kill him once and for all, although it’s not too much of a surprise how that endeavour concludes.

So Thorgal needs to escape an island and his family from a silver mine, and while Thorgal just has himself to rely upon Aaricia, Jolan and Wolfcub find themselves allied with Kriss, and thay allegiance is about to be tested to its limit.

Kriss of Valnor’s return isn’t too much of a surprise as the books have been carrying the cover artwork for a few volumes now, but leave it to Van Hamme to offer a satisfying wrinkle as to the how and the why. Never a pleasant character, and always self-serving, this apparent change of heart is treated carefully to give her actions a rational logic throughout. Coupled with this is Rosinski’s fabulous artwork that looks better than ever on these pages – beautifully laid out with complex, detailed hatching and polished off by Graza’s considerate colours. The overall effect lifts the book no end.

I’d feared we were nearing the end of the Thorgal tales but very pleased to see there are several more to come. This remains one of my favourite ongoing series, largely down to the creative storytelling and myriad possibilities that presents. If you’ve not yet given the books a try then I hope this has twisted your arm.

And if you liked that: All the titles are available at www.cinebook.com