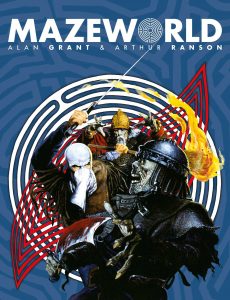 It’s been three decades since the death penalty was abolished in Britain, but now Adam Cadman is to the first in a new swathe. Except Adam’s execution doesn’t go to plan, and rather than dying he finds himself on Mazeworld, still in the hood he was hung in (now with eye holes to see) and with the noose around his neck. Mazeworld is immediately complex and overwhelming, with bizarre creatures, human civilisations, grand architecture and lethal mazes, but the people that see Adam arrive believe he’s somebody else and Adam finds himself thrown straight into a bitter revolutionary struggle. Back on Earth his body lingers while on Mazeworld he’s offered the opportunity of redemption.

This is a pleasingly thick collection that gathers the entire tale within its pages, and to add to the satisfaction there’s a definitive ending to it all. Mazeworld lays its cards on the table from the outset with Arthur Ranson’s detailed illustration constructing panoramas, cityscapes and street scenes that are awash with architectural detail. Even some of the page layouts tip a nod to the books theme and title.

Adam Cadland begins as an unlikable individual but Alan Grant steers him towards an alternative path where he ends up embracing the notion of heroism, selflessly helping others. Along the way he meets some weird people in some weirder places, but there is an internal logic to the fantasy that carries it all along.

Having not read it before I rather enjoyed reading the entire saga in one sitting rather than spread out in small chunks within the pages of 2000AD. Rebellion have upped their game recently, becoming curators of much of Britain’s comic history, but they already had plenty of gems of their own and this is one of them.

And if you liked that: Can I point you towards Cinebook’s Thorgal?

Thorgal Vol 20: Kriss Of Valnor
Spirou & Fantasio 15: The Shadow Of The Z