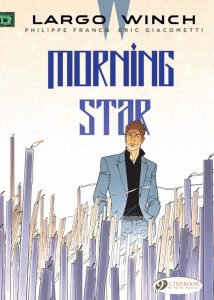 There’s no doubt that writing and presenting a series of stories based around a multi-billionaire does, at times, call into question the morality of having that much money. Van Hamme, and now Giacometti, balanced this by showing off Largo’s more philanthropic side, his unwillingness to bring hardship to his workforce and his general ability to err on the side of the good guy. But there’s been another aspect of the story, broached before, that increasingly resonates with how we see global corporations behave, and the creators look as if they’re going to tackle it.

The W Group is vast, with its fingers in everything from banking to manufacture, and it has just one shareholder: Largo Winch. The scale of his business, the threat he presents as the head of a powerful corporation, and his immense wealth all make him a target for other business behemoths looking to nudge out a player, not to mention the resentment it may cause to those struggling to earn a living or live day-to-day. So when attending a global forum in Yucatan with many similar moguls Largo takes the opportunity to seek some information from a rival which doesn’t end well, then at the forum itself he finds himself threatened when boxed in by protestors. That turns ugly fast, and although he barely escapes with his life (in rather a tremendous fashion, it must be said) it’s clear someone’s out to paint him as a corporate rogue. What’s worse is that they appear to be succeeding.

One of the problems, as explored in a previous story, is that Largo pays no tax due to the scheme his adopted father set up running through Liechtenstein. Tax efficient it may be, but to the rest of the people paying their share this is an uncomfortable reminder to Largo that despite his best efforts he is privileged in a manner only a few people can be. If he’s to rectify that he needs to start paying tax, but that offers up other routes for his enemies to take advantage of, and suddenly Largo’s looking very threatened indeed.

This isn’t a story about tax structures, although it’s a constituent part. It is a story about power struggles, murder, corporate espionage, greed and power, and for those reasons it stands out as a gripping thriller. Imagine Ian Fleming choosing to write about the world of big business instead of the spy business. Similar stakes and threats, just the context and playing field has changed. A tip of the hat to Francq and Giacometti for pulling this off, and to Van Hamme for putting in place much of the groundwork. I’m fascinated how they’ll resolve this one.

And if you liked that: Looking forward to the conclusion, coming soon