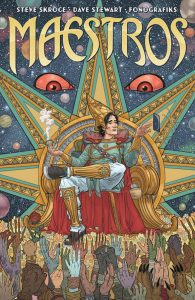 Born the child of the most powerful being in the universe and a human mother, Will never really got to grips with the magical way of life. His father is the Maestro, the wizard king, and his only weakness appears to be Will’s mother, so when Will messes up she is able to take her son to grow up in Orlando back on Earth. Years later, and forced to remain subtle about his magical talents, Will has grown into a young man looking for an angle to get ahead, although all he seems to be achieving are tawdry tricks for over-the-hill males looking to recapture their vitality. It’s at this point he learns that the entire royal family has been slain and he’s next, but if survives it he gets to become the most powerful being in existence.

There’s two things about Maestros that stand out almost immediately. Firstly it’s that Steve Skroce, who I’ve only really known for his artwork up until now, can write, and write exceptionally well. The book is chock-full of imaginative asides, complex worlds, creative characters and satisfying twists and turns, not to mention some great humour, that if it had been coupled with a less accomplished artist would still have made for a great read. But then there’s Skroce’s art too. Beautifully detailed, bringing all the action, majesty and magic into sharp relief by page after page of well crafted and fantastically presented illustrations, the combined effect is a truly outstanding book that will have you grinning throughout.

It’s not Harry Potter, it’s not any fantasy or science fiction tale you’ve ever read before; Maestros something else entirely, and it’s bags of fun.

And if you liked that: We’re promised another…

Distant Worlds Episode 1
Trent Vol 3: When The Lamps Are Lit