By Mézières and Christin 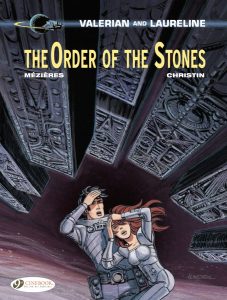 Although we’re moving ever closer to the dramatic climax of Mézières and Christin’s opus I can’t help but feel, in all the building tension, drama, and excitement, a bit of sadness that it will be soon be over. I’ve even been a little reluctant to pick this book up as it brings me a step closer to the end. But there’s savouring something and there’s missing out, and I was definitely starting to feel like I was missing out.

Now with a very handy “Previously on Valerian and Laureline…” box at the beginning of the book you get the added bonus of a brief refresher on all the relevant points that came before, and with nineteen volumes before this one that certainly is a lot to keep track of. Valerian and Laureline are heading into the Great Void, a starless part of space where the universe is still expanding. Everyone on board the craft has their own ideas of what they’ll find out in the emptiness, each pursuing their own agendas, but seemingly happy to work together to achieve their aims. Forced to make a landing on a desolate planet they encounter giant carved monoliths known as the Wolochs, plus some old adversaries of Valerian and Laureline who appear to be acting as the stone’s emissaries, all hellbent on preventing any further exploration of the Great Void. The following confrontation results in a loss of crew and the destruction of the skiff that brought them down to the surface.

So on the face of it all the cards seem to be stacked against Laureline and Valerian, but the ever-resourceful Laureline has a trick up her sleeve (and not for the first time). There’s a determination to discover what happened to Earth and they just may have made it a step closer.

So this is a book with plenty of nods backwards to past characters and events, solidifying connections and revealing twists and surprises along the way. I particularly like the very blatant nod to Corto Maltese as one of their fellow passengers. Clearly a heartfelt nod to a much loved character. This most certainly isn’t a book to start with if you’ve not read any of the series before, but it’s certainly one you’ll want to get if you have.

Bring on The Time Opener!

And if you liked that: Lay your hands on volume 21, the next book in the series.