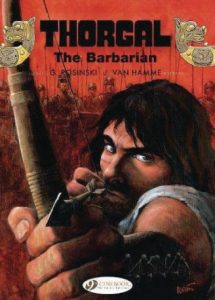 You’ve got to feel sorry for Thorgal and family. Struggling with the violence and disruption of their northern home they decided to sail south in search of more peaceful and prosperous lands, but to date all they’ve found is selfishness, greed and danger. Having lost their ship they’ve attempted to cross a desert only to be taken as prisoners and sold as slaves in a community analogous to a Roman outpost. Thorgal is bought to be used in a trial for young officers who must hunt him and others down to show off their skill with a bow, giving Thorgal the opportunity to turn the tables on his pursuers. Sparing the life of the Governor’s son, Thorgal is granted a freedom of sorts, working for the Governor to teach others his skills with the bow, and reunited with his family, but to the people of this land he is considered the Barbarian.

Bleaker still, Thorgal’s group picked up two companions recently and they too have suffered at the hands of these so called civilised people, and their tragedy further underscores the dire situation that living under a tyrannical ruler presents. With little hope, and serving at the whim of someone who sees you and your family as little more than objects presents little opportunity for escape. However, while attempting to come to terms with their lot things are about to get a lot worse.

Van Hamme wields another challenging and enthralling script, not letting up for a moment on the pressures and problems presented to the group. Potentially, this could be the most difficult situation Thorgal has faced, infused with loss, pain and anguish all around. Despite everything. Thorgal remains stoic and determined, level-headed and calculating, finding opportunity when there appears to be none – the antithesis of the Barbarian. It may well be one of the worst jams he’s faced, but you can’t count him out yet.

For me these books have maintained a high standard from the outset, defying expectations and avoiding repetition, which means the reader has the genuine prospect of inventive, creative storytelling at every page, and where each new book has the potential to take you somewhere very different. A stand-out series.

And if you liked that: Kriss of Valnor next!