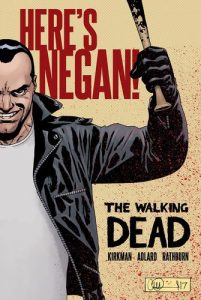 Whether you’ve been following the comic or have just witnessed his actions on the TV show, Negan is one unbalanced and frightening individual. Savvy enough to rule with an iron fist and not tolerate any wavering from his personal rule of law, but irrational and unpredictable enough that you never truly know quite where he stands, or what he may do next.

The comic has gone to great lengths to show a deeper character, a more troubled individual, who although it would be difficult to sympathise with you could at least, at times, see some form of personal honour and a warped rationale. This has been necessary to stop him sliding into pantomime villain territory, such is the bombast with which he usually operates.

This book collects the pages originally shown in Image’s promo magazine that attempt to offer some context and reasoning for where Negan comes from and why he does what he does now, beginning with where he was just before society fell. It’s not a long book, and I daren’t delve into the plot for fear of giving away anything, as after all we’ve followed various characters’ arcs as they fought to survive after the outbreak and so this isn’t treading a widely different path. Suffice to say the initial set up for Negan fits perfectly, and although not a pleasant person by any accounts, he was certainly not the monster he becomes. Why he becomes that monster is explained in a series of incidents that to his mind become essential for survival, however misguided, and it also goes some way to explaining who he is now in the comics – don’t wish to spoil that either, but let’s just leave it that he’s still alive and has been spending some surprising quality time with Rick.

This book was perhaps inevitable to help us frame Negan’s current story, even though it’s a little difficult to ignore the horror he’s inflicted on those he’s met. It’s a welcome addition to the Walking Dead library, although at £18 for such a slim book I’m not so sure it’s good value.

And if you liked that: Crack on with the comics and collected additions.