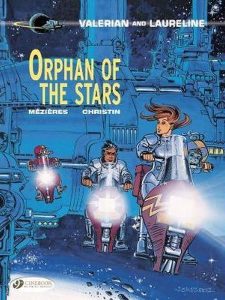 Following on directly from the previous book, the Orphan Of The Stars sees Valerian and Laureline in the odd position of being in possession of a small child, and what’s more, a small child who just happens to be the heir to richest person in the galaxy. Pursued by the Quatuor Mortis, a group of four harmonious bounty hunters, our trio find themselves relentlessly chased and constantly under threat, with the situation made worse by being separated from their ship. They need to be able to evade capture and, somehow, offload the burden that is the Caliphette of Iksaladam.

This volume opens with a nicely constructed conundrum as Valerian and Laureline are chased through some sort of space-born facility but lacking a ship, meaning they’re in serious trouble and at a very real risk of capture. Fortunately they’ve collected a couple of handy items on their travels, and by putting these to use they’re able to give themselves a fighting chance.

At the risk of the Caliphette becoming a permanent member of the group, something needs to be done with the child once and for all, for his best interests as well as their own, which places Valerian and Laureline in an interesting moral position as, after all, they’re not his parents nor legitimate guardians. It’s quite the conundrum.

There aren’t that many volumes to go before we reach the conclusion of the tale, so it’s intriguing as to whether Valerian and Laureline will be able to return their lives to their previous normality or instead, at least, find some sort of status quo they can be happy with. Until then there are a few stories yet to tell.

And if you liked that: Volume 18 is hot on the heels of this one.