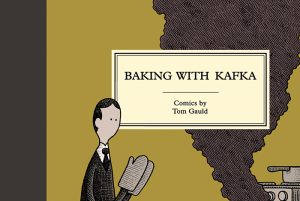 Tom Gauld returns with another collection of cartoons based around the themes of literature, science, history and other topics that tickle his fancy. And jolly good they are too.

Many of the cartoons focus not just on the genres and subjects of the novel, but on the authors and the writing process too, skilfully blending the highbrow with plain silliness to make something deliciously sublime. And thus we get Franz Kafka, baking.

Patterns and thought experiments are sometimes returned to but taking in a completely different direction, ratcheting up the daftness and leaping about potential possibilities to keep you grinning.

One of Gauld’s favourite techniques is to draw a large panel cartoon with similar objects or subject matter throughout, but colour-code the items and offer a key beneath for you to pick apart the joke. Such an example is “The Angry Mob” which ranges from “boiling with rage” through “a tiny bit angry” to “just likes being in a mob”, with many other steps in-between.

Other highlights include an insight into planning Neil Gaiman’s “Norse Mythology” book tour with Odin of Asgard, and a guide to common and less common villains, which naturally includes “evil banker” and “loathsome industrialist” but also features “diabolical ceramicist” and “malignant barista”.

All very nicely done, and despite us being some months out yet, perhaps one for the Christmas list.

And if you liked that: You’ll definitely enjoy the previous volume  You’re All Just Jealous Of My Jetpack.