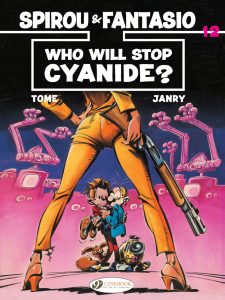 Whether it’s the earlier adventures or these more contemporary tales told by Tome and Janry, Spirou & Fantasio is a manic, frenetic comic adventure from beginning to end every time.

This story opens with a brilliantly depicted segment of Fantasio attempting to return a camera that sets the tone beautifully for what’s to come over the coming pages. With no replacement camera to offer, the shop instead gives him a bizarre camera-like gadget that transpires to be a cross between an SLR and BB-8. Self-aware, it quickly decamps and Spirou and Fantasio find themselves in pursuit, naturally ending up in Champignac-In-The-Sticks. Here they meet a redundant stationmaster who has turned his attention to inventing, with a specialism in robotics, and although the little wheeled camera droid is a proud achievement of his, his greatest and most striking creation is a life-like android that has dubbed herself Cyanide. Initially created with companionship in mind, Cyanide is intent on being the mistress of her own destiny. Unfortunately, Spirou and Fantasio know nothing about this, but they do see what appears to be a bound and hooded woman who needs rescuing, and it’s these noble but misguided actions that sets loose a dangerous and powerful foe. The question is, can they get the genie back in the bottle.

A fair few years have passed since this story was first penned, but robotics and AI are still a mainstay of popular culture and even the news, so some of the themes of this book seem as fresh and relevant as when they were first written. As always, not only does the story’s telling rattle along at a fair pace, but every panel is superbly drawn, from the beautifully realised vehicles to the pantomime actions of the cast.

These books are a lot of fun, and Who Will Stop Cyanide is no exception.

And if you liked that: Check out the full Spirou & Fantasio offerings over at www.cinebook.com