You are here: Home › Reviews › The Complete Peanuts
By Simon Chadwick on September 19, 2017 in Reviews 0 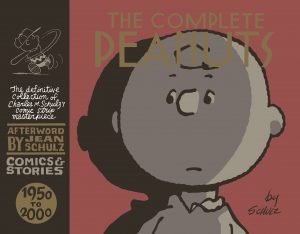 I’ve written a couple of reviews, here and here, about some of the earlier collections in this series, and now some six years later I’ve managed to make my way through to the 26th and final volume, so here’s a little run down of the package as a whole.

Growing up Peanuts was never my favourite strip, although it was one I was well aware of and one I’d read if the chance presented itself. Because it featured children my presumption was that it was intended for children, but it didn’t always chime with me. Now I’m older, I have to say I thoroughly enjoyed reading the strip in its entirety and I appreciate that what I didn’t understand when I was younger was probably down to my own limited experiences of life. Although they are children, each Peanuts character is struggling to cope in their own way with a wider world, and through them it reflects our own bewilderment, frustrations and disappointments, whether that’s Charlie Brown’s inability for anything to go right for him, Snoopy constantly hiding in a fantasy world of his own making or Peppermint Patty excelling at sport but failing utterly in class.

What the complete series offers is a context for the character’s behaviours and a framing for running gags, and this additional depth adds weight and purpose throughout. Charlie Brown and Snoopy are, without doubt, the heroes of the strip, but Schulz regularly runs with another character, riffing off their personality traits. When Sally comes along she gets to voice the apparent futility of having to learn endless facts and never feels the purpose or the benefit of school, whereas Rerun, a character we see intermittently for years, becomes something of a muse for Schulz in the final few years and is allowed to blossom as a character in his own right. You wouldn’t say there’s a narrative at the heart of the strip, but the characters, like all of us, are heading somewhere in life whether we like it or not, so we get to join that trip.

Over the past six years I’ve kept a book by my bedside and dipped in every now and again, stretching the experience out but never tiring of it. When I hit volume 25, years 1999 – 2000, it was with a definite note of sadness that halfway through the book it was all over. I’d read the final strip and what a bittersweet moment it was. The remaining half of the book is turned over to Schulz’s earlier creation, L’il Folks, a definite precursor to Peanuts that even features a character called Charlie Brown now and again: “Here comes good ol’ Charlie Brown. How I hate him.”

The 26th and final volume is something of an oddity, and a little out of step with the others, featuring reproductions of gags, strips and books that Schulz created over the years for advertising tie-ins, seasonal reasons and for charity. It’s by no means a desperate contrivance to pump out another hardback volume, and it’s interesting enough – this is the Complete Peanuts after all – with many a gag or illustration that you’re a little richer for seeing.

Having devoured them all I have concluded that my favourite character, by far, is Peppermint Patty. At times she’s the antithesis of Charlie Brown, and at others she’s the female equivalent. Very early in the strips she’s battling equality, angry at how the sports news only focuses on the men’s games. There’s no mother figure in her home and her father is often away, so she’s very independent if not always competent, shown whenever we witness what she’s packed herself for school lunch. Her constant stream of D- grades allow us to pity her and, I think, mirror our own unrelenting swim against the tide.

The books are all hardback, they’re all wonderfully put together and laid out, and they’re a joy to read. Consequently they’re not cheap either, but spread out across a few birthdays and Christmases, and buying a couple in-between, they’re a worthwhile use of your hard-earned cash. It’s been a real pleasure to experience Schulz’s career, his sense of humour and his developing cartooning style over such a long period, and I hope these books serve a reminder of his extraordinary talent for decades to come.

And if you liked that: Paperback versions are now being produced – slightly easier on the pocket