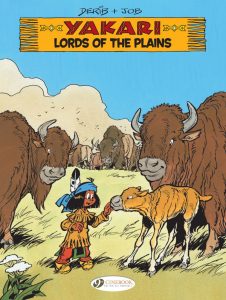 Yakari is a great series for younger readers that explores the interior of American through the experiences of a Native American boy and his tribe. The tribe themselves live a harmonious life with nature around them, but sometimes that balance is distorted and Yakari seeks to understand why through his gift of being able to speak with animals.

Lords Of The Plains begins with a buffalo hunt, and a matter-of-fact demonstration as to why the hunt is necessary for the tribe’s survival. It’s handled carefully, but honestly, a difficult task for any writer on such a subject. The following day Yakari seeks to learn more, so with his steed Little Thunder he strikes out across the plains. When Yakari comes across the buffalo they are vast in numbers, and despite Yakari’s people hunting them the previous day they accept Yakari and he spends much time sharing stories and learning about these great beasts. His final task is to seek out an expectant mother buffalo that has taken herself away from the main group to give birth, although when Yakari finds her and her calf he also discovers a hungry wolf eager to take advantage of the weak mother and feeble newborn. Yakari is able to use fire to keep the wolf at bay, but now he’s created an enemy that wants revenge, and it may be too much for the little hero.

Curiously, the wolf, who’s needs are no greater than the tribe’s, is painted as having much darker motives for wishing to eat buffalo, so in order to suggest the difference the wolf is shown as being sneaky and dishonest in comparison to the honourable intent of the people. It’s a fine line, and a common danger of anthropomorphism, but fortunately it’s handled gently enough by the creative team that readers should understand the intent.

As an introduction to comics and cartooning, Yakari is a great place for younger readers to start, full of talking animals in a setting that is easy to identify with. Derib’s art is very child friendly while Job’s writing is accessible and captivating for young minds. Certainly a must for school libraries or anyone wanting to open up the world of comics to their child.

And if you liked that: There are lots more Yakari books at www.cinebook.com