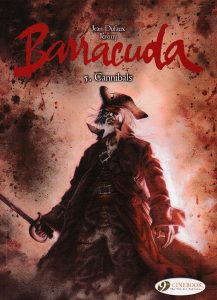 This series is very much in the fantastical vein that Pirates of the Caribbean sits in rather than, say, Treasure Island, but as we’ve romanticised the actions of pirates for so long now this is becoming something of the norm.

The opening of this book splits the narrative between Puerto Blanco with a captured Raffy and an island of cannibals where Emilio, Jean Straight-Cut, Tar and Dona Maria have found the Barracuda, but it’s imposing captain, Blackdog, is missing. Learning that he may be on the island Jean Straight-Cut and Emilio go to search for him and run into a man who claims to be the island’s master. He informs them that Blackdog is the prisoner of the cannibals who seek to extract the whereabouts of the Kashar diamond. While they decide how to handle this threat Raffy is negotiating his liberty with Puerto Blanco’s new masters, the Spanish.

So the respective scenes are set for some serious confrontation and not a little blood as they fight for their freedom. We also get to see what all the fuss with the Kashar diamond is really all about as its power is laid bare before the Barracuda can set sail once more.

As I’ve mentioned, this is a fantastical rather than a historical book, so the characters are writ large, full of attitude, grim determination and with a flair for violence, not to mention a keen dress sense. Jérémy’s clearly a gifted character designer, so he dials the pirateness up to eleven and let’s rip. However, in this particular book, his best creation by far is Penilla, the cannibal’s witch doctor, a gruesome man of demonic appearance.

There are moments when all the posturing and flamboyant characters almost get too much, but as long as you treat this as a story in the spirit of Thorgal then you can look past it to an exuberant and exciting adventure. Now, where’s my rum?

And if you liked that: Book 6 is on its way…

MALTA Comic Con
You’re All Just Jealous Of My Jetpack