You are here: Home › Clear Blue Tomorrows
By Simon Chadwick on November 2, 2016 in Reviews 0 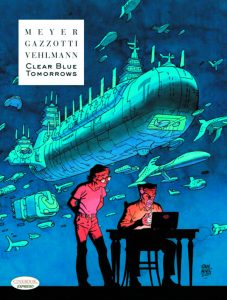 The future is a terrible place, where a global corporation called TechnoLab holds the upperhand in everyone’s lives. Dissent is impossible due to  a side-effect of cerebral implants that boost mental ability, so the status quo is secure, so one man, Nolan Ska, builds a time machine to travel back to when F.G. Wilson, TechnoLab’s CEO, is a young man with his heart set on different things. According to Wilson’s biography he was literally robbed of a future as an author when his manuscript was stolen. Supposedly a great work of literature, Ska arrives at the moment of the theft and tackles the robber, only to discover that Wilson’s writing is terrible and that the tale had been blown out of all proportion. Fearing Wilson would still follow the same path to TechnoLab, Ska persuades Wilson to submit a short story to a publisher instead – anything to keep him as a writer and away from TechnoLab. However, Wilson is as dreadful as ever so Ska offers to help, plucking memories of his own life and history from the future and turning them into sci-fi tales. Taking no credit himself, Ska begins to feed Wilson’s ego and his success.

Each time Ska writes a story we get to see that tale as a brief vignette of the future, then drop back into the main tale to see Wilson once again reaping the reward of Ska’s graft. As a story device it’s a great way to explore small narrative ideas and still drive the main story forward. The small tales themselves have suitable twists and dark humour and my only grumble is that it all seemed to be over so quickly. It’s not as if it’s a thin volume either, it’s just that it rattles along nicely with the smaller interludes disguising this.

Two of the three creators work on the wonderful Alone series, so if you’ve come across that you’ll appreciate the standard of this book. As far as I’m aware this is a standalone book, so no previous books to find out first, nor no requirement to continue reading a series afterwards, so if you fancy dipping a toe into European comics and seeing what they’re like then this isn’t a bad place to start.

And if you liked that: Check out Green Manor, also from Cinebook

The Illustrators – The British Art of Illustration 1900 – 2016
Gangster Hamsters