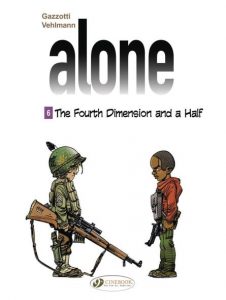 When the latest volume of Alone arrives in our house there’s a bit of a fight as to who reads it first (I don’t always win). Gazzotti and Vehlmann’s creation manages to appeal across age groups and gender, neither talking down nor shying away from more difficult topics, and when they do embark on more sensitive material it’s done with consideration, not exploitation.

In the last volume we were given some answers as to the unusual predicament the children have found themselves in, but we already have members of the group questioning that logic or at least trying to frame it within a context that makes sense to them. What doesn’t help is that both Dodzi and Saul have clearly died and yet they both stand amongst their friends once again, so something very odd is certainly going on.

Saul’s return is a spanner in the works for the efforts put in by our original group of children as he slowly subverts their authority and causes a severe rupture within the larger group. Calling themselves the Clan of the Sun they begin to divide up the city, laying claim to various buildings by placing their mark on it and challenging Dodzi’s small group to do the same. Although reluctant to play the same game they still find themselves drawn in, but at a disadvantage that almost immediately forces them to cross into the Clan of the Sun’s territory – much to the glee of their opponents when they take Ivan hostage for doing so.

But Saul’s machinations are clearly nothing more than a grab for power, and while Dodzi’s group are concerned with what they found beyond the red cairns, and what all this means, Saul seems only concerned with building a power base and pushing his rivals out. It doesn’t help for them all to be so distracted.

The balance between childhood innocence and grasping for an adult understanding of what to do runs constantly through the series. Every heroic gesture seems true to a child’s perspective, even if it isn’t necessarily the right or safest thing to do. The children are playing a game of one-upmanship but with a toybox full of dangerous objects intended only for adults. Brutality and foolishness keep rearing their heads while common sense threatens to lose its own, and the stakes are clearly higher now. In Alone there are no adults coming to the rescue, no easy answers and a city filled with danger that appears to be getting worse, so you remain firmly on the side of the young heroes attempting to make the most of an impossible situation. Despite the difficulties they’re trying to do a good job.

On a final note, I’ve a son who has not been a big fan of reading. He loves Alone, and as a consequence he was persuaded to read Charlie Higson’s The Enemy series, a similar tale but with zombies, and is now reading the Gone series by Michael Grant. It’s all been possible because of Alone.

And if you liked that: Volumes 7 and 8 coming soon!

The Walking Dead Vol 26: Call To Arms
Mike’s 5 concerts in a day for Children in Need