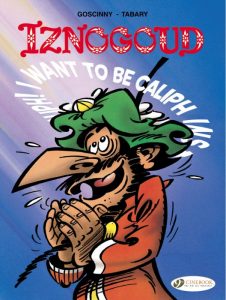 Feeling down? Need a smile on your face? Then you really can’t do much better than Iznogoud, and, fortunately for you, there’s a new volume available of puntastic outlandish tales of magic, greed and consequences.

Iznogoud is the Grand Vizier to the gentle Haroun Al Plassid, the Caliph of Baghdad, and he craves the power his master holds. Like Wile E Coyote hungering for the Roadrunner, each tale resets the dire outcome of the last for Iznogoud to blindly stumble through yet another wickedly inspired plot with much the same result. The strength of the strips lies in the partnership between the superbly gifted cartoonist, Jean Tabary, and the master of witty comics writing, Rene Goscinny, as they turn out strip after strip of magical misadventure and comeuppance.

In this latest volume Iznogoud, and his trusty sidekick Wa’at Alahf, visits a haunted palace where a spectre is known to turn the mind of a Caliph to jelly, so all Iznogoud needs to do is persuade the Caliph to spend a night there. In Scandal In Baghdad a character with the ability to literally sniff out wrongdoing offers his services to Iznogoud to have the Caliph dethroned, while in the third tale the action centres around a wax museum where the exhibits are past and future killers that can be magically brought to life, but not without consequences. The fourth tale, The Voracious Cushion, finds Iznogoud presented with a giant cushion, not unlike the one the Caliph spends all day reclining in, that can make the person lazing upon it disappear. Finally, the fifth story involves a lowly, poor fisherman who is suddenly in possession of enormous wealth due to the discovery of an ostrich that lays golden eggs. It just so happens that Iznogoud needs a fortune to bribe the Caliph’s army, so the ostrich must be found.

So the premise is always daft, it just about always features a magic something or other, and the results are pretty much the same, but like Tom & Jerry or Sylvester & Tweety, it’s the humour, the grotesque characters, and the glorious artwork that carry you through to the inevitable ending. One of these four tales is the work of Tabary alone, presumably one of the stories created after Goscinny’s death. Tabary has clearly absorbed much of Goscinny’s rhythms and pace for the story, but it does lack Goscinny’s extraordinary gift for word play. That said, it’s quite possible that if it weren’t labelled a such you’d not notice the difference as Tabary harvests the experience of drawing hundreds of Iznogoud pages by this point.

The stories feel effortless and timeless, but they’re genuine works of art that deliver plenty of gags wrapped around weird and wonderful situations. There are plenty of reasons Goscinny is one of the most-read French authors in the world, and this book is one of them.

And if you liked that: There are plenty more volumes to choose from. Just visit www.cinebook.com