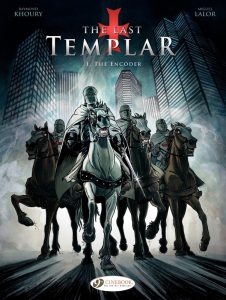 Cinebook’s new series is a tale that begins the Templar knights as they are forced to flee Jerusalem. With the battle all but lost two knights are entrusted with the task of getting a small chest away by sea, a mission they barely achieve. The story then moves to present day New York and the Metropolitan Museum of Art is hosting a spectacular launch for their new show called the Treasures Of The Vatican where we’re introduced to archaeologist Tess Chaykin, along with her mother and daughter. Just as she begins catching up with an old archaeologist friend four horseman dressed as Templar knights assault the exhibition with swords and automatic weapons, grabbing valuable artefacts before fleeing into the night.

It’s a serious enough case to warrant the presence of the FBI, and soon a shaken Tess and her family find themselves being charmed by the handsome Agent Reilly. Later, when reviewing the CCTV footage, Reilly realises the close proximity of Tess to one of the criminals so arranges to meet up, allowing Tess to not just share her eye-witness account but her insights and knowledge of the Templars. Significantly, it’s the object she witnessed being taken, a sixteenth century encoder, that proves interesting.

Back at the Vatican a meeting of cardinals are horrified at the events in New York, but one is more disturbed than most, realising the significance of one of the stolen objects. And back in Manhattan, one of the members of the heist crew is attempting to sell one of the objects through a crooked antiques dealer. The dealer knows this is immensely risky, and fearing for his own safety gets the authorities involved, leading to the flushing out of the crook.

There’s is clearly more this encoder than first meets the eye, and with religious fervour, twisted and incomplete histories, and a great helping of speculation of legend the waters are well and truly muddied, although there does appear to be one individual who knows exactly what’s going on and what it all means.

The Last Templar, like many a good adventure yarn, takes a historical context and weaves in an ancient secret and a silent conspiracy with the promise of great riches. The book states it’s not suitable for the under 12s, largely due to a few bloody deaths along the way, but certainly for kids and adults it’s got the makings of an interesting mystery with plenty of secrets to be unlocked.

And if you liked that: Book 2 is available soon

Rosalie Lightning
My Dancing Bear: The Story Of Reg Smythe