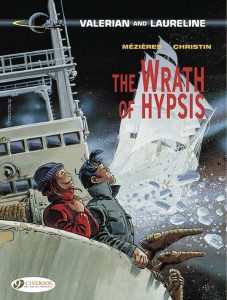 With the recent ComicCon footage of the Luc Besson Valerian movie being well received more people than ever, particularly in the English speaking world, are turning their attention to the source material. And that can’t be a bad thing for Cinebook who’ve put a lot of effort into sharing the stories for this new audience. So with all that in mind, should this be the volume you first pick up if you want to dive head first into the adventures of Valerian and Laureline?

No. It’s not. This is the concluding segment to the previous volume, The Ghosts Of Inverloch, and while I’m sure you’d delight in it, it’s going to make much more sense if you start with book 11. But if you’ve already enjoyed that one, then what does this book offer? Well, reunited at last, and with a small collection of aliens and humans, our heroes find themselves gathered at a Scottish castle debating their next move. The moving planet, Hypsis, appears hellbent on disrupting Earth and Galaxity’s existence, largely for fear that they will encroach on Hypsis itself, but Valerian, Laureline and friends must seek out a way to find it. This involves a trip to the Arctic Circle, a pod of Orcas, a tall-masted ship and an alien with astounding tracking abilities. Once the chase begins a confrontation with Hypsis is inevitable.

Spoiler-wise, I shan’t say any more, other than that the creators have a little fun with an interpretation of the Holy Trinity which is rather good. As with all Mézières and Christin’s work to date, the burgeoning ideas and impressive scale of their vision allows for a very satisfying read. And going back to my earlier comment, if you’ve really never read any Valerian and Laureline before, then really you do need to start at volume 1!

And if you liked that: Cinebook have announced plenty more books to keep us occupied over the coming months