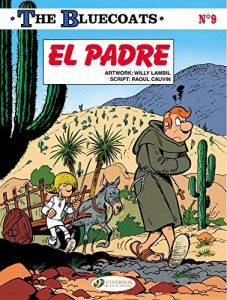 Chesterfield and Blutch have been out on patrol and run into a bunch of Confederates, forcing them to flee across the Rio Grande to safety in Mexico. No sooner do they think themselves safe that they are tracked by Apache bandits, but a disguise of a local villager and a monk taken from the corpses of two unfortunate victims of these outlaws offer them a narrow escape into the hands of a rival band of Mexican bandits. Strongly encouraged to accompany them to a nearby village Chesterfield and Blutch find themselves having to live up to their disguises, not only to fool the Mexican bandits, but also the villagers and the circling Apaches too. It seems that whatever they do, there is little chance that they will get out of this one alive.

If you’ve not read a Bluecoats book before then think of it like an Asterix book with a slightly more serious tone. That’s not to say that it’s not got plenty of humour and comic situations, but the peril is more immediate, and the history better represented. Blutch is a self-serving coward repeatedly forced to acknowledge a softer side, while Sergeant Chesterfield is quick tempered but equally swift to do the right thing. The American Civil War may not be particularly familiar to many outside of the USA, so this isn’t a bad place to get familiar with it through the experiences of these two somewhat reluctant heroes.

Personally I think these books are great, and should be a feature of all our primary school libraries, but equally anyone with an interest in cartoons and comics should get some satisfaction and smiles from it.

And if you liked that: Plenty more Bluecoats at www.cinebook.com