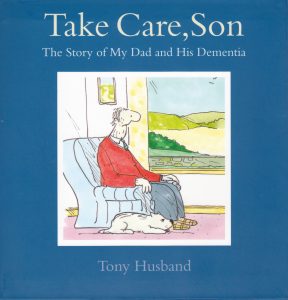 A family member of ours recently went through a troubled period with vascular dementia. It’s a very nasty condition that begins with robbing you of words and then slowly strips away your ability to do the simplest of tasks. You might know that making a cup of tea involves a kettle but you can’t work out why you’ve not got one now you’ve filled said kettle with sugar, tea bags and milk.

The key to handling it, as family, is to remember, even in the most difficult of moments, that it’s not willfull, just confusion and frustration combining as a personality is slowly stripped to its core.

My experience was a distant one, with my brother-in-law’s father, so for me what made Tony Husband’s story all the more compelling is that this was a story much closer to home, charting the deteriation of his own dad.

Like with any illness, the implications are wider than just the person with the diagnosis. Family have to cope with the added pressures, feelings of gulit and worry, not to mention dealing with the results of accidents, muddles and harm.

Tony’s approach to all of this is to keep his dad centre-stage throughout the book, and keeping his own presence out of the drawings. Instead Tony acts as narrator, sometimes talking directly to his dad in a given panel, sometimes describing an event. Keeping the visual focus on his dad is a clever move because you’re with him, as an observer, throughout the decline, and although this is a story of father and son, you’re very much invested emotionally in the father.

I can’t begin to imagine how cathartic a process this must have been, and although we don’t really learn what Ron Husband thought of son Tony’s cartooning career, you’d like to think that there can’t be many better acts of rememberence and love than this.

Take Care, Son is another excellent example of how cartoons can be used to get across a difficult and personal topic in a touching and thoughtful manner. The immediacy of the cartoons, often mixing humour and pathos, is absorbing while at no point trivialising this most important of topics that every one of us is likely to encounter on some level or another.

It’s a tribute to Tony’s affection for his father and his skill as a storyteller that, despite the constant difficulties that plague those with vascular dementia, he is able to show the relationship as a loving and supportive one that endured to its bittersweet end.

And if you liked that: If personal stories told in a cartoon format appeal to you, you may like to dip into Raymond Briggs’s Ethel and Ernest, the story of his parents.