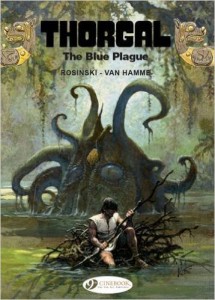 This latest outing allows us to catch up with Thorgal and his family as they seek a new, quite life, away from the havocs of the north, but, as is increasingly obvious, the world is an unforgiving place and one danger is simply replaced with another as they sail further south.

Straying into the channels of a mangrove forest they come across what appears to be an empty vessel, but when Jolan hops aboard he finds the blue corpse of the boat’s owner. With little time to think they soon find themselves pursued by diminutive pirates and running out of room to manoeuvre their boat, so abandon it to hide in the water beneath the spreading roots of the trees. Just when it looks like they’ll be discovered they’re rescued by the local Prince aboard his royal ship and taken to his island stronghold where they find some semblance of tranquility, until, that is, the Prince makes a move on Thorgal’s wife Aaricia and reveals a blue patch on her skin. Fearing they’re all infected, the Prince casts the family into a steep-valley where they find more victims of the plague waiting for death, but as always Thorgal isn’t willing to accept the fate being pushed upon him and chooses his own path as he seeks a cure for his family’s woes.

The genius of the Thorgal books is how adaptable they are to pace, genre and viewpoint, so not every tale is about Thorgal himself, not every story is wall-to-wall action and you’re never quite sure if you’re going to be reading science fiction, fantasy, or something else entirely. Because of this every book is abundant with promise and is yet to disappoint. Rosinski’s art sits so perfectly with Van Hamme’s scripts that just a single panel lifts you straight back into Thorgal’s world or sword and survival, and no matter what Van Hamme seems to throw at him, Rosinksi delivers. This remains one of my absolute favourites and if I could persuade just one of you out there to give it a try I’d consider that a job well done.

And if you liked that: Pleased to see form the back cover that we’ve at least another three volumes to come!