You are here: Home › Damocles Vol 2: An Impossible Ransom
By Simon Chadwick on December 7, 2015 in Reviews 0 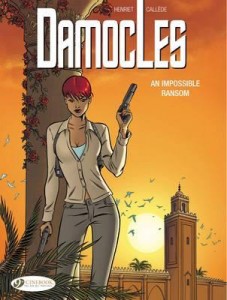 For Ellie and her team the number one goal as Damocles agents is to protect the client they’re being paid to keep safe. A professional approach, a reliable team, and a little boost from the stimulant called Blitz is usually enough to get the job done, but there’s a determined group of idealistic individuals that are keen to see Ellie’s team fail. In any group dynamic there are weak points, and the kidnappers have identified a possible way to gain the upper hand through one of the Damocles agents, meaning that a safe house in Morocco may not be quite as safe as everyone thinks it is.

But there’s more going on here than the kidnapping of an industrialist’s privileged son. A bitter revenge that extends back years proves the catalyst to make the daring kidnapping a reality, but the execution pushes all involved to the brink and tests some long-held assumptions.

Damocles is an interesting concept for a series as it’s neither your usual spy thriller, a police/detective format, nor a run of the mill mystery, and with the addition of Blitz it’s on the very edge of the sci-fi/superhero genre too. What this means for us, the reader, is that we don’t fall into patterns and story paths we’ve trodden before, allowing for a fresh and intriguing page turner. The other unusual aspect of the book is that Ellie and the Damocles agents are doing a job that so often in TV, film and literature is the domain of faceless extras in the background or they become easy cannon-fodder for a hero (or villain’s) plans. Damocles shares what’s going on in their heads, with the conflict of doing the right thing as an employee alongside the arrogance, stupidity or visceral danger that a client with bags of money can bring. After all, they don’t have to like who they are protecting, but protect them they must do all the same.

Quite where the series will go next is anyone’s guess, but Henriet and Callède have put together something that has the potential for some great stories as the characters and scenarios grow.

And if you liked that: Volume 2, Perfect Child, is coming soon