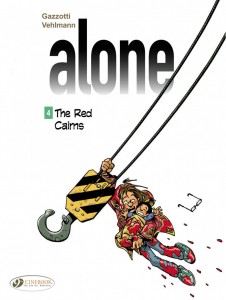 Alone is achieving something rather special with it’s tale of children abandoned to fend for themselves when the majority of the population disappears. In many ways in feels like other post-apocalyptic narratives, and although it deals with some mature themes and harrowing situations, the creators don’t lose sight of who their key audience is and so manage to build tension and explore situations without resulting to inappropriate content. It’s a tricky balance that they’re able to pull off through good storytelling and great artwork, and just like the Walking Dead is really about the people surviving rather than the zombies, Alone is very much about the characters survival in an almost empty world. They do come up against their own problems, but rather than being larger than life villains or supernatural menaces their foes, on the face of it, appear to borrow from the tropes of other thrillers but somehow manage to weave them into the tales as much more ordinary threats. In this book there are what at first glance appear to be sentient apes, dressed in clothing, but the explanation for this appearance, which comes later, helps ground the book in a much more believable reality.

That’s not to say that their isn’t something mysterious going on (how can there not be given the set-up) and whatever that mystery is it appears to have scale to it, but our focus remains on the five children (and their small growing band of hangers-on) and their enforced period of growing up too soon. All five are having to find their own way in this new world, and despite being stronger together it’s Dodzi, perhaps the most troubled but ultimately the most interesting of the group, who fears that he’s just not strong enough, so in a crisis of confidence opts to go his own way. This in turn places Ivan in an awkward position where he must face his fears and undertake a hugely heroic act, not only venturing into the apes’ lair but doing so in a very dangerous but essential manner in order to save the life of an abducted baby.

This is an award-winning children’s series and it doesn’t take long to understand why. It gets the balance just right between danger and mystery, threat and survival, and in constructing it all through the experiences of this group of children makes it all the more intriguing.

And if you liked that: Volume 5 on its way soon