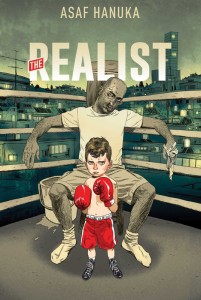 Asaf Hanuka is an interesting conglomeration. He’s an Israeli cartoonist of Iraqi parentage, he’s married to a Polish wife, he’s a father, a workaholic, an atheist and a twin. He lives in a country that gives him a hard time because of his ancestral heritage and yet he doesn’t resent that treatment. He appears conflicted as to the chances of a war with Israel’s neighbours, he doesn’t pay his wife enough attention and he’s most definitely addicted to games on his smartphone. And we know all of this because Hanuka (as in the Jewish holiday) writes and draws a weekly full page strip (sometimes using the space as a large single panel) in which he shares his life and thoughts.

These autobiographical nuggets are a mix of humour, self-depreciation, social observation, surrealism and playfulness, with himself (or at least a version of himself) placed very much at the centre. His family feature but he doesn’t like to name them,  referring to them as his wife and boy, and later to his daughter as ‘she’ as if we’ve already been introduced. These disarming respectful nods to their privacy are somewhat undermined by the, at times, rocky state of the marriage; something he makes out he’s responsible for this unhappiness, which, if true, is sad that he’s aware enough to put it on to paper but not address the cause.

Technology features heavily in the strips, from battling to save the contents of his computer to a day lost due to playing a particular addictive app on his phone. He regularly uses the full page panels to show himself interacting with, or being part of, technology, such as a broken hollow-faced adult with a steampunk flip-top head revealing a miserable version of himself as a child inside. In another he’s strung up like  a puppet with tangled strings, but the strings are wiring and cables contorting his body.

In another he’s comforting his baby daughter as he shows his son how to use Google Earth to find their old house. As his son zooms in further and further he comes to their old apartment’s window to see a younger version of his dad comforting him just as his dad does now with his sister.

These aren’t belly-achers, but a much gentler, and often touching humour, made all the more captivating by Hanuka’s astounding artwork. Interesting stuff throughout as it offers an insight into a mind living in another culture that underscores how similar we all are.

And if you liked that: Try Joe Sacco’s Palestine