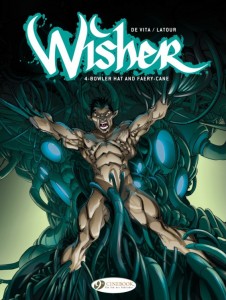 The genie is very much out of the bottle now, with Nigel in control of his transformation, but when he attempts to use his monumental wishing powers to save Merlin the cost of those powers is exposed. With a traitor amongst them and the forces of MI10 drawing the net tighter, Nigel’s only hope of saving Merlin’s life lies in the heart of MI10’s lair, which means potentially giving them everything they’ve been seeking should he be discovered.

Meanwhile, the one they know as the traitor is acting to redeem himself for the actions he’s been forced to undertake, and that means assistance just when Nigel needs it, while over at New Scotland Yard Inspector Grey is putting together the pieces that just may reveal this hidden world and secret agendas taking place around them.

As a final act, this ties up most, but not all, of the story threads, with a comeuppance or two, a sacrifice and a happy ending for some at least. We don’t really get to realise the immense power of the wisher and I couldn’t help but wonder if something grander was planned, or is planned for a further series. That said, it’s not a disappointment, just not where I thought it was heading. The scope and scale, with so many fantastical races living beneath London, is potentially enormous, but we barely scratch the surface of it all, so I’d be intrigued to see what the greater implications there are for those that live below.

If you’re a teen-reader then certainly give this series a chance – it should appeal to you with it’s magic in the modern world set-up.

And if you liked that: Also check out Cinebook’s SAM