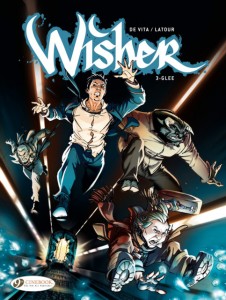 Glee fills in some more about the situation that has led Nigel to where he is now, including the possibility that one of the wishes was used to make the world forget about his existence. In order to be sure as to the true nature of what went on they need the assistance of King Beholder, but that means smuggling him past the agents hellbent on eliminating magical beings from the world. A plan is formulated aimed at causing confusion and distraction culminating in a messy confrontation in a train tunnel, a decimated train carriage and the assistance of a minotaur. And although King Beholder promises revelations, another secret reveals itself at an inopportune moment.

De Vita and Latour are tackling a difficult concept here, attempting to merge fairytale and mythology in a contemporary setting, simply because when you put powerful beings in the everyday you have to explain why the rest of us don’t notice them. That’s all very well when they’re in hiding, but not so helpful when they’re displaying their abilities or unusual appearances. By and large though they’re handling it well, with a growing supporting cast of characters adding more interest to Nigel’s story, and the steady threat from MI10 keeping it interesting. There still seems much to cover for the final arc of this tale, so expect the next book to be packed from cover to cover.

And if you liked that: You may also like Disenchanted, from Image

The Borgias
‘Learn to Speak Cat’ 14