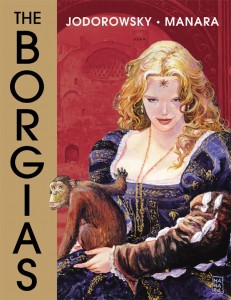 The Vatican has seen many lamentable moments in its long history, with a particular period when some pretty despicable figures pushed their way to the front of the queue to become Pope. The Borgias family, and in particular Rodrigo Borgia (Pope Alexander VI), are thought to be some of the worst. Historians now challenge some of the more outrageous things that are attributed to them, but that still leaves plenty of debauchery, incestuous relationships, profiteering and murder.

To be clear Jodorowsky, perhaps best know for his Incal series, has written a dramatisation here, so we’re given a fiction built around some facts. There are characters (and some seriously major historical ones) that live a very different life, and come to a very different end, within these pages, so don’t get to the end thinking you’ve read a fine interpretation of the period. It’s an entertainment made all the more entertaining because of the incredible outrageousness of the real people it’s based around.

I enjoyed The Incal, but what really drew me to this book is that it was illustrated by Italy’s Milo Manara, an absolute master of the art form. Not only is he one of comicdom’s greatest living artists, but he has a certain penchant for drawing tales of a more adult nature – and all that that entails. So not only was he the perfect choice to draw this book, he’s painted it too, so his exquisite illustrations become all the more vibrant and visceral.

So if it’s not been made clear already, this is a book aimed at adults alone. Rarely a page goes by without some sexual exploitation, hedonistic bawdiness or a brutal murder or mutilation. Because Pope Alexander VI’s grasped power he aims to keep it, and that means empowering his children to reinforce his reign and ultimately succeed him. Anybody and everybody is there to be exploited and trodden upon to raise the family higher, and that even extends to rivalry amongst the children too. At times it’s unpalatable, vicious and often cold-blooded, but Jodorowsky’s writing and Manara’s art don’t portray the Borgia’s antics, excesses and successes as a triumph but as a bitter, dark victory that will have consequences.

Rich in content, extreme in nature, but magnificently put together, this is some of the finest work from two of the world’s greatest creators. I’m sure it won’t be to everyone’s tastes, but it is undeniably a sumptuous and impressive volume throughout.

And if you liked that: The sublime Manara Libraries are well worth a look