By Marazano and Shang 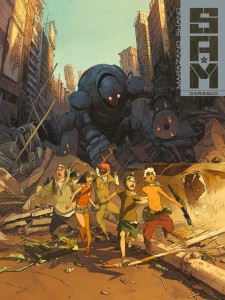 Post-Apocalyptic worlds are cropping up all the more in comics, literature, film and TV – maybe that’s just a reflection of our current collective angst – and it’s interesting to see just how the various creators make the dynamics of these resulting worlds work.

In SAM, the information we’re given is that robots, of some kind, have steadily been eliminating the human inhabitants, annihilating populations and laying waste to cities. The survivors, or at least the ones we get to meet, were small children, pushed into ventilation pipes or hidden in crevices during the robotic rampage and surviving unseen amongst the greater carnage. Now a few years have passed and those small children have grown into young teenagers, seeking food and caches of medicines amid the rubble and detritus of the cities, whilst hiding from the patrolling robots that still seek them out. It’s a grim and difficult existence, with the particular kids we’re following hiding out in some sort of bunker amongst the sewers.

The story itself centres around a group of five of the young teens and, in particular, Ian, a tech-competent free-thinker who throws perhaps a little too much caution to the wind. His boldness leads him into a direct confrontation with one of the giant robots (think The Iron Giant, or X-Men’s Sentinels), but instead of obliterating Ian it appears to hesitate before another member of the group hits it with a rocket. Ian is so taken with the notion that it didn’t kill him that he chooses to stay out in the open in an effort to revive it, much to the horror of his companions, because after dark the worst of the robots are on the prowl. What happens when these robots happen upon Ian makes his mind up that something truly amazing has finally happened to their little group, and there may be hope in this bleak future after all.

With very manga-esque artwork, to the point that the excellent colouring makes it feel like an anime movie throughout, the architectural destruction and general chaos this kids live amongst gives the book a powerful individuality. You’re not quite sure where or when this is set, but it’s dry, it’s brutal, and it’s dangerous. It’s never quite explained where the technical competence has come from – after all, Ian is achieving some remarkable feats with electrical engineering and robotics – but who can say at this stage what has transpired in the intervening years.

Like Cinebook’s sister title, Alone, this is a great tale of children surviving against the odds, with a good dollop of danger thrown in too, although this is a much harder, even scarier (not scary, just scarier) tale in comparison. So if you’re enjoying Alone, or you enjoy the adventure strips in the likes of The Phoenix, you’re going to enjoy this.

A great start and, with Cinebook’s track record, shaping up to be a great series.

And if you liked that: This is the first in a four volume series – second out soon. Get your copy here.

Even More Bad Parenting Advice
Marc : The Caricatures and Cartoons of Mark Boxer