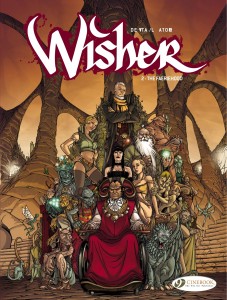 The magical world, and its downfall, is further expanded and explained in this second volume, with Nigel coming to terms with this hidden township beneath the streets of London and its wider implications. Hunted and slowly exterminated, many of the inhabitants of this labyrinthine habitat are the last of their species, so the protection it offers is important to all the diverse inhabitants, but there are those very eager to learn of where exactly it is and finish the job that was started so long ago.

Nigel must also come to terms with who he is and why, if he is a genie of incredible age, he can remember a childhood. Part of an explanation is offered by the magical creatures’ librarian, Cy (a cyclops), but what Nigel begins to understand is that if nothing else, he’s offering these people hope. The question he must wrestle with is why did the genie inside him choose to hide himself in the first place, and what would it mean to set him free.

Nigel’s fear of releasing the genie-side of himself are a little like Bruce Banner grappling with the Hulk, except the genie can do a lot more than smash – he can alter the fabric of reality itself with a wish. MI10 and, in particular here, Michael Bound, are keen to lay their hands on Nigel because of what he represents so it it’s a question of who’ll get to Nigel first; the bowler-hatted bad guys, or the genie inside.

Hats off to De Vita who goes to great lengths to capture the look and feel of today’s London through it’s vehicles, people and architecture, bringing a level of realism to this fantasy tale. Latour is building the tension, and indeed the menace, with the genie coming across as much more threatening than any of the other villains in the piece, but whether that’s a bluff we’ll have to wait and see.

Making a world of magic work in a contemporary setting hasn’t always worked in popular culture, but Latour and De Vita are crafting something here that both integrates the magical folk but successfully keeps them at arms length from being streetwise and modern, with Nigel becoming the bridge for that gap. A strong second outing, and I look forward to finding out where we go next.

And if you liked that: Book 3 is on its way