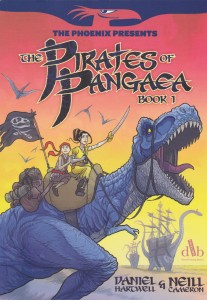 This one had me sold a while back when I found out there were dinosaurs in it. Set in the 18th century, a landmass known as Pangaea sits amongst the islands of the Caribbean. It’s unusual in that it’s a land where the dinosaurs never died out, and since modern man has arrived on those shores he’s worked to tame the land and the creatures.

We’re following the journey of Miss Sophie as she’s taken to her uncle, the governor of Pangaea, and at the beginning of the book she’s sailing upon a tall-masted ship. When they arrive at the port the entire ship is hoisted into the air and settled upon a cradle on a sauropod’s (think long-necked dinosaur) back. So, without changing their made of transport, the ship is now able to sail upon the Sea of Green, an inland grassland.

Of course, what can be balanced upon the back of one sauropod can be balanced upon the back of another; there are other ships sailing the Sea of Green, and some of them are pirates. Miss Sophie’s ship is attacked and boarded and Miss Sophie taken prisoner with the pirate captain taking particular delight in learning who her uncle is. Fortunately there’s a reluctant cabin-boy aboard, so together, coupled with the knowledge of how they calm and manage the dinosaurs of the island, Sophie is able to escape, but not alone.

The strip appears in the British weekly The Phoenix, and is a popular one amongst the readers I know of – and you can see why. There’s plenty of pirate action, despicable villains, action, heroics, treasure, and lots of dinosaurs. If you’ve ever come across Dinotopia then you’ll get the idea of the feel and the period, but what gives it an added edge is the addition of the pirates in their land-based, sauropod-backed ships.

Proper adventure comics, and enjoyable for kids and adults alike.

And if you liked that: There are more books available from The Phoenix – check them out here