You are here: Home › Blacksad: Amarillo
By Simon Chadwick on January 2, 2015 in Reviews 0 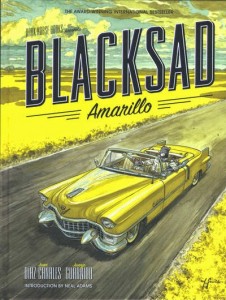 This is the third in a series of three anthropomorphic book reviews, this time featuring the latest offering from writer Juan Diaz Canales and artist Juanjo Guarnido in their Blacksad series.

Blacksad, like District 14, has a 1950s’ setting, but this is unmistakably America. Blacksad himself is a detective, very much of the hardboiled variety, and more to the point, he’s a black cat. He’s been in New Orleans and it’s time to return home, but he opts not to take the plane. Fortuitously he spots a rather wealthy businessman drop his wallet in the car park and upon returning it they strike up a conversation and it transpires that the businessman needs somebody to drive his beautiful golden Cadillac Eldorado back west, something Blacksad is happy to help with.

We also get to meet a couple of tortured writers, one a bull-headed (actually he’s a bison, but you get what I mean) poet and one a young lion. Especially to Abe, the poet, the creative process is everything, and sharing their words with editors, to be butchered and distorted, is beyond comprehension. However, the lion, Chad, has already had a book published and is almost ready with his next, so he is fighting with an inner conflict and to maintain credibility and standing with his poet friend.

They cross paths with Blacksad at a gas station where Blacksad steps in to prevent Chad and Abe stealing a motorbike from a biker gang in order to complete their journey when their car dies. Although he successfully prevents bloodshed, in the confusion Abe and Chad instead make off with the Cadillac, leaving Blacksad with one serious problem, and no option but to try to track them down.

The writers make their destination, ending up at a party where Chad is pushed too far and the result is a murder, which is going to complicate matters even further for Blacksad.

That’s plenty rightthere, and that’s just the beginning. What follows is some solid detective work in an attempt to track Chad down, involving a travelling circus, a beautiful woman, two grim FBI agents with a grudge against Blacksad, and a lawyer who just also happens to be Chad’s literary agent.

Like the previous Blacksad books, this is a remarkable achievement from cover to cover. A gritty heartbreaking tale full of comedy and tragedy, and some of the most beautiful and evocative artwork you’ll find in comics. Guarnido’s astounding ability to capture the likeness of animals and invest them with human characteristics and expression is just wonderful, and turns an already impressive book into something supremely special. Needless to say, the previous volumes have won heaps of awards, and deservedly so.

And if you liked that: I’d certainly recommend you start at the beginning with the first Blacksad tale – you’ll be hooked