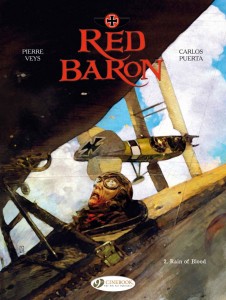 Using an intriguing art style and a fictional take on a real historical figure, the first volume certainly hooked me in. Puerta is audaciously combining digital painting with manipulated period photography to generate an immersive and atmospheric tone that further blurs the lines between fact and fiction.

Richthofen is frustrated by his first dogfight aboard the clumsy two-man AEG and so is determined to learn to fly for himself. Hugely confident of his own abilities and with his strange additional skills of reading the fear in others, he knows he can achieve great things as a pilot. By the time he’s qualified he’s rigged a gun that he can operate from the pilot’s seat and finds himself scanning the skies above the trenches, and it’s at this point he confirms what a threat to the enemy he really is.

Even on the ground he’s dangerous. We’re shown a flashback when he was with the cavalry probing into Russia, foolishly probing a wasps’ nest of resting Cossacks with nothing more than a rifle and a companion. But to really illustrate just how untouchable he has become, and to prove to his friend just how formidable his hidden abilities are, he steps into the ring of an unofficial boxing bout and takes on Germany’s champion, with his opponent failing to land a single blow. Richthofen is cocky, he’s arrogant, and he’s supremely assured of his own prowess. It looks as if nothing can stop him.

The creators tread a fine line with Richthofen, getting close to his ruthless and cold nature without celebrating it. He is not a pleasant individual, but is in possession of enough charm to keep you interested in him. Unlike a two-dimensional villain, Richthofen is, in many ways, an ordinary man fighting a war alongside many similar men, and it’s not until he has cause to show his pitiless side that you realise he’s nothing like the other men at all.

We’ve now reached a point where it appears that nothing can stop Richthofen from claiming the skies for himself, so I’m greatly intrigued to learn where Veys and Puerta will take this next.

And if you liked that: Volume 3 coming soon