You are here: Home › Recounting Streets
By Simon Chadwick on November 17, 2014 in Reviews 0 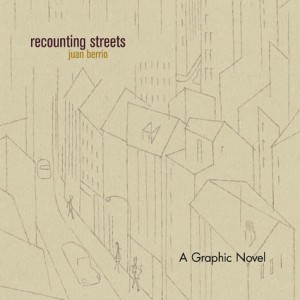 City-life has a unique vibrancy that makes it the ideal backdrop to many an unfolding drama across a dozen genres. Juan Berrio has attempted to bring the city into the centre stage, often making the streets and the buildings as much a part of the tales he wishes to tell as the inhabitants and workers that live there. The book’s broken down into a series of comedic scenarios, some of which are straight out-and-out gags and some which employ some element of the city to sketch out an idea through word play or with visual props. It’s a neat, and rather generous, hardback book, and the square pages comfortably act as single panels to the lengthier comic narrative, so with the very first vignette we get a dapper individual walking down the street towards a shuttered door. He produces a key, unlocks the shutter, rolls it up, then, remembering the key, gladly throws it into a bin. The pay-off, as you turn the page, is the man stood smiling behind the counter of his 24 hour Drugstore.

A recurring gag is the gent walking along a night-time pavement sporadicly spot-lit by streetlamps, but with a different outcome each time he steps into the cone of light. Some are pure slapstick and some are surreal, but they’re all great gags. The longer, more audacious tales involve clear word play, such as a silent drama with key moments taking place outside of aptly named shops, such as a surprise engagement outside of a shopfront saying Grant Proposals, or the acceptance outside of a Bingo hall. Another tale shows panel after panel of mobile phone conversations, with the two recurring characters talking to one another (on opposite pages) and as we follow their conversation we realise that it appears to be influenced, as well as the conversations around them, by the shops they pass. In other words, an excuse for lots of puns.

Berrio’s style is minimalist and uncluttered, utilising a simple duotone palette. It’s a freshly different book and is as equally accessible to someone new to cartoons and comics and it is to the seasoned reader, not to mention that its size, presentation and agreeable tone would certainly make it a welcome gift now that the Christmas season is almost upon us.

And if you liked that: You may also enjoy Smokehouse Five by Sergio Aragones

Battle of the Cartoonists 2014
Red Baron Vol 2: Rain of Blood