You are here: Home › The precarious life of a political cartoonist
By Cartoonists Club on October 30, 2014 in Articles 0 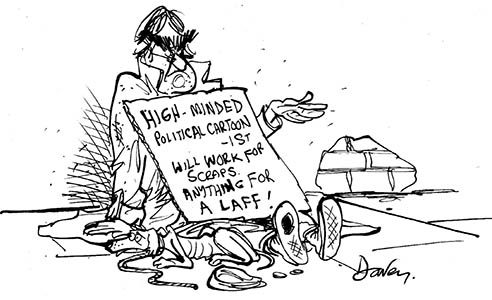 This article by Andy Davey first appeared in The Jester issue 476.

Here’s a secret. Don’t tell anyone but… political cartooning is a doddle. Easy-peasy. The stories are set up for you in the news every morning. All you have to do is point out the hypocrisy inherent in most political stories with sufficient self-righteous bombast and Bob is a sure fire avuncular blood relative. You don’t even have to be funny – if you don’t believe me, check out a sample of political cartoons from major international papers over a week and see if you can raise more than one or two laughs. I mean a real coffee-spitter; not a clever, knowing chuckle. OK, some stories demand seriousness, but the best satire does need to be funny. And generally, with noble exceptions, we ain’t. Real, clever humorous talent resides elsewhere; in the best gag cartoons, in stand-up, film, writing and TV. 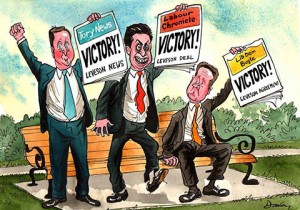 So, it’s easy, but why on earth would you want to do it? To have fun? To allow catharsis of your massive pent-up creative force? To set right the State of Things? All good reasons, yes, but drawing for newspapers controlled – through editorial policy – largely by vested big business interests will likely result in frustration.

Well, OK, money then. You might say that editorial cartooning for newspapers is one of the very few paths to financial comfort open to us cartoonists, rivalled only perhaps by successful strip syndication and writing the killer Christmas cartoon book. You’d be right. The problem is that in the UK there are perhaps only half a dozen full-time jobs remaining for editorial cartoonists.

Newspaper print circulation has withered. And advertising revenue has gone with it. There is no longer the money to pay journalists, let alone cartoonists. A few years ago a fellow cartoonist observed that newspaper editorial cartoonists were dinosaurs; Jurassic monsters destined for the evolutionary waste bin in short order. He was right. I personally – a minor species lost to science – have since died out. Other weightier and more impressive beasts survive and even flourish, but their habitat shrinks by the week. 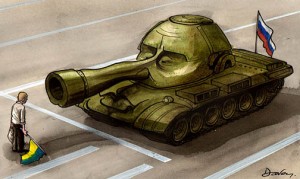 Martin Rowson, flourishing dinosaur and Sage of Blackheath, has a more optimistic metaphor for us. We are parasites; altogether more successful players in the Darwinian game. Upon losing our hosts (Georgian coffee houses, Victorian periodicals and now print newspapers), we simply jump off and find new blood supplies. The new sanguine host must surely be the internet. Its lack of editorial control is intoxicating, finally giving us the freedom we crave.  And it provides all manner of diversions and publication platforms to prevent us dwelling on the lack of money available to creators in this new medium. Twitter and Facebook and their other little friends welcome all creators to their digital embrace. “Go!” they seem to say. “Create! Draw! Write!” And we can now all be stars in our own lives as we whistle ever-quicker around this entropic digi-verse and up our own McLuhan-esque fundament.

But how do we make a living? Yes, I know that sounds rather vulgar to you, dear reader committed artiste that you are, but one does have to keep oneself in Absinthe, n’est-ce pas? Well, I’m afraid I don’t know. We could take solace in the thought that we are merely a subset of the larger group of creators in general. The tsunami of the internet has washed us all into the same flood basin as people who previously would have been hobbyists or part-timers. That’s not to denigrate artists or writers (ooh, Kafka, Lowry, Eliot etc.) who relied on second jobs. But maybe we will all need “portfolio careers” in future.

So, given that we can all become political cartoonists now, what should we draw? More of the same tired old daily Washington beltway and Westminster village tittle-tattle concentrating on today’s policy gaffe? Yes, by all means – it’s tremendous fun. But I’d like to suggest we look a little deeper. In a recent review of two books on the news industry in the New Statesman Peter Wilby suggested that the “cacophony of information that surrounds us” on digital media might afford us the opportunity of recreating a more reflective secondary journalism something like the Victorian pamphlet which gave an overview of a particular topic rather than responding to every twitch of a PR man’s i-phone. As Alain de Botton puts it, news “is woefully short on… coordination, distillation and curation”. Maybe cartoons can help there. That’s exactly what a good political cartoon does.

And if we’re looking deeper, why not look wider too? What is the point of satire, after all? To show up where power lies, how it is being abused and by whom. And if you can squeeze in a few fart gags on the way, so much the better. But where does power lie these days? The power of Westminster has withered. Maybe it’s moved to Brussels. I’d add to that a few more places; the privately controlled media, global mega-business, international finance, lobby groups.  All of these are unaccountable. Prime targets, surely? Yes, but very difficult to satirise because their major players are mostly hidden from our media. Hitting these targets would surely be worthwhile…but it would mean that political cartooning would no longer be easy. Oh, well, back to the Westminster tittle-tattle then. But don’t expect to be paid for it. 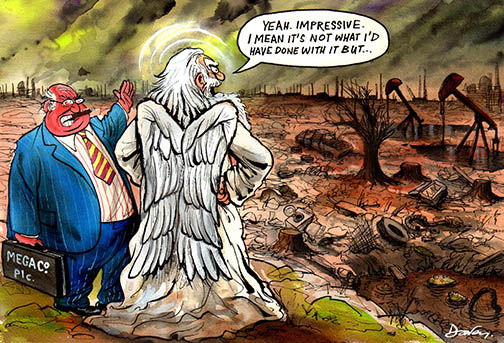