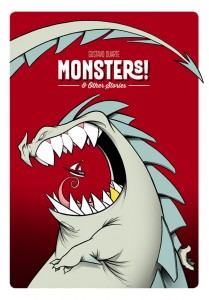 I bought this one based on some sample illustrations accompanying the promotion, and was rather pleased to see it had a thoughtful introduction from Sergio Aragones. The reason Aragones was asked is that both artists produce wordless comic strips, and while Aragones is the veteran master, Gustavo Duarte is relatively new on the scene.

Duarte’s has an incredibly lovely, fluid style incorporating considered minimal brushstrokes, great comedic pacing and some oddball twists and turns to keep you fully engaged. Essentially, you don’t ever really think that you’ve read something like this before.

The book features three tales, each told with nothing more than pictures, so the characters reactions, movements and motivations all have to be captured in their wordless pantomime performance. On the couple of occasions word balloons are used Duarte manages to cleverly use pictures instead, even designing them in such a way that they become part of the scene. A beautiful touch. I don’t really want to give too much away about the individual stories as that will steal the fun, but, in a nutshell, one is about an alien abduction at a pig farm, one involves two anthropomorphic birds in an office attempting to out-run fate and the final, most ambitious, one is a Godzilla-style rampage where an elderly master of Fortean phenomena takes it upon himself to tackle the threat single-handed. Because the books don’t use words the humour is all drawn out through the exaggerated movements, expressions and situations, and the stories unfold with a grace and timing that borders on perfection.

A really lovely, and genuinely well executed, example of the medium at its finest.

And if you liked that: Then you’ll love anything by Sergio Aragones

Donald McGill – The Picasso of The Pier
Hogarth’s London