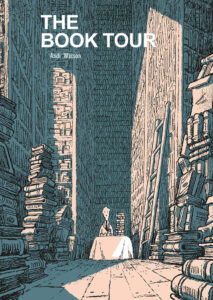 I bought this one on the strength of the cover illustration and a very brief synopsis. The cover features a character sat at a table surrounded by towering bookshelves, utterly dwarfed by them in fact. It’s a simple line drawing with economic colouring, but it packs a significant punch none-the-less.

When I sat down to read it, the first thing that hits you is that it’s packed with snippets of praise across the cover and fold-in flaps. People like this book. But, bah, what do people know. I’ll be the judge of whether it’s any good or not.

First page. A five panel black and white layout of a city at night, comprising architecture of character, courtyards, archways, alleyways. Like the cover, it’s not overworked but still manages to evoke a distinctive sense of place as you move around the quiet streets. There are three pages of this, then a fourth that draws a brief conclusion to the introduction. At this point I’m completely hooked.

We’re then introduced to the character of G.H. Fretwell, a writer with past works under his belt but who has yet to rise to greater things. He’s about to leave home to embark on a book tour to promote his new book, although things don’t begin well when his wife pays such little attention to his grand moment that she cannot even bring herself to see him off. In that brief exchange we get to learn all it is we need to know about Fretwell. He’s not unaccustomed to life’s minor disappointments, but they don’t stop him from taking his next step. And he’s certainly in for a string of disappointments.

First the victim of a theft that somehow ends up being his own fault, then a book signing where nobody turns up. And it’s all downhill from there.

Andi Watson’s economy of line keeps the characters’ interactions subtle and deadpan, cranking up the humour in the situation as Fretwell’s predicament worsens. An honest, professional man, Fretwell continues onward, swept along by circumstance and misfortune and unable to extricate himself. His circumstances shouldn’t be amusing, but you just can’t tear your eyes away.

It’s an absolutely excellent book, as much for the artwork as for the story. One of those happy occurrences where the creator is equally gifted and so we all benefit. Make this the next book you buy.

And if you liked that: Try Mooncop by Tom Gauld