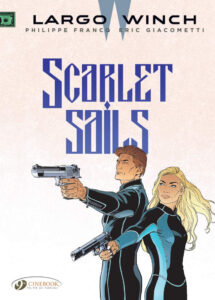 I read this book in the same week that the GameStop stock market story hit the news. The relevance was startling.  As institutions grow and expand their influence their choices have knock-on effects for us all. It draws others in, to react, to object, and to take advantage. None of this is particularly new in of itself, but it’s fascinating because boundaries are being pushed and what we consider to be normal is being tested. In Scarlet Sails, Largo’s in big trouble and it all stems from something not too dissimilar.

The W Group is massive, a global entity that touches the lives of most people on Earth. But unlike most businesses of that scale, it’s not on the stock market but in the controlling hands of one man. And that makes the company vulnerable. Discredit the man, you damage the company. Lay your hands on the deeds that give that man control of his company, and he doesn’t have a company any longer. And so this is the situation Largo finds himself in, once again at the centre of the news cycle for all the wrong reasons, with somebody pulling the strings for reasons as of yet to be understood.

When the motive is revealed, it’s all about money. What’s interesting, and surprisingly relevant, is the nature in which the bad guys plan to make that money. What they’re doing is decidedly illegal and wrong, and yet there are everyday practices, of short-selling company shares for example, that are deemed as wholly fair and above board. Here’s hoping the GameStop story doesn’t end quite so bloodily as here, though.

A standing ovation for Giacometti who has taken over the writing of Largo Winch. Not only has he succeeded in a seamless continuation, but he’s kept the book relevant, exciting, and essential. It was no small matter to follow in the footsteps of Van Hamme, but Giacometti appears to have achieved it with a swagger. I look forward to reading more from him.

This is another series that deserves a much wider audience than it enjoys. If you’ve not tried it yet, do it. You can forget spy-craft and countries knocking heads together. The highest stakes are now found within the world of big business and they have implications for us all.

And if you liked that: Plenty more Largo Winch available now from www.cinebook.com

2020 – The Year We Were All Cancelled
The Book Tour