You are here: Home › Islandia Vol 3: The Legacy Of The Sorcerer
By Simon Chadwick on December 1, 2020 in Reviews 0 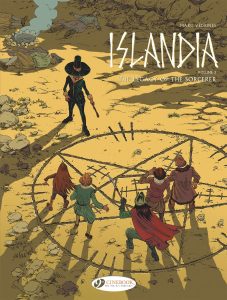 If you’ve got this far then you’ll know the previous book took a very abrupt change of course. An incredibly bold move by Vedrines, it certainly wasn’t something I saw coming. Of course, now, he has to deal with the fallout of the storytelling for the final installment. No mean feat.

I’m tip-toeing around the edges of this because I don’t want to spoil the twist. Suffice to say it has sorcery involved. When you introduce magic into the equation the possibilities become very broad indeed, and the story could go, well, anywhere. If anything, this final book is about consequences. Consequences for past actions, consequences for score-settling, and the consequences of changing direction. You’re kept on tenterhooks for some time while the characters end up in a The Thing scenario – not really knowing who to trust, or who is really what they say they are. But perhaps the biggest consequence is having to deal with the inevitabilities of the previous book’s twist.

Again, I’m trying to be careful not to give anything away, but one of the biggest issues any storyteller has to face is getting the reader or viewer to care about their protagonist. This is achieved through character development, by giving the character the room to interact, comment, and react, and generally be related to. Lots of storytellers get this wrong and the result is an audience who don’t connect with the character, and ultimately don’t care. Vedrines choices at the end of volume 2 create an unusual set of circumstances where he effectively erases the effort of the first two books and now asks us to start again. That’s brave.

There’s another wrinkle worth commenting upon here. The Legacy Of The Sorcerer is about redemption, and it is redemption against the backdrop of Iceland. The volume becomes a history book, charting the highs and lows of the nation. Considering what we’ve already been presented with this is something of a jolt, although not necessarily a rude one.

To some degree, Islandia, as a series, is a challenging read. It asks a lot of its reader as you march across the Icelandic landscape. But it is told with clear affection for the place, and this underscores all three books. The narrative keeps you guessing, and I guarantee you’ll be surprised by it. I think, ultimately, this is why it works. You’re not reading something you’ve read before. You will be intrigued, and you’ll be thinking about it long after you’ve put it down.

And if you liked that: I can’t recommend The Marquis Of Anaon enough