You are here: Home › Return To Aldebaran Episode 2
By Simon Chadwick on November 17, 2020 in Reviews 0 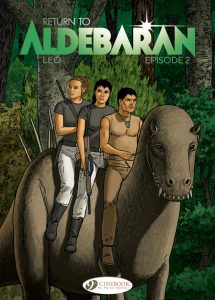 Having arrived on the strange and very distant world, Marie’s been kidnapped by what appears to be a human native. Kim and Luc return to Aldebaran for help which means all that the others can do is wait. Despite best intentions, it doesn’t seem that anyone can put a foot right, and matters turn from bad to worse with a change of leadership on Aldebaran. Kim has just one week to find Marie and return, otherwise the doorway will be sealed in concrete. Meanwhile, Marie has to deal with her captor, who isn’t behaving in quite the manner she would expect. As the weather turns it’s not so much the flora and fauna but the environment itself that will prove the biggest threat.

There are several fracturings and unifications throughout this book. Overall they leave you with a sense of hope and a potentially positive outcome. However, that does overlook one thing. For a humanist tale, Leo embraces all that is positive in humankind’s ambitions and possibilities, but that also means confronting the darker sides of our nature. Jealousy, anger and revenge all rear their heads here, and the destruction they bring could be the end of them all.

As always, my favourite bits involve the speculation as to what the alien creatures would look like, and there are a few nicely executed ideas here. These always work best when incorporated with how that creature fits within its environment and exploits its niche. I particularly like the diminutive predator with the flat head and the club-like tail. And there’s a theropod analogue too. That one’s good.

The final page says to be concluded, so there may well just be one more volume to go to conclude the entire story arc. That’s a lot to potentially pack in. But it will be worth it.

And if you liked that: If you’re new to these books jump right in at the beginning, here.

The Department Of Mind-Blowing Theories
The Great Lockdown Cartoon Book