You are here: Home › Distant Worlds Episode 4
By Simon Chadwick on September 23, 2020 in Reviews 0 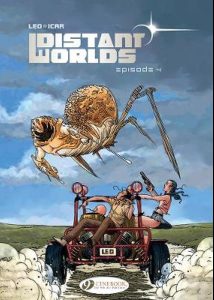 Paul’s life hasn’t been an easy one of late. After his family made the tremendous journey from Earth to Altair-3 at the request of his father he’s spent all the time since trying to track him down. It’s been one frustration after another. His father always seems to be a step ahead of his efforts to trace him, and now there are bounty hunters involved too. Nothing makes sense. And when Paul finally gets what appears to be a definitive answer – that his father is dead – he spots him behind the wheel of a car. Reinvigorated, but no less frustrated, Paul embarks on a search of the surrounding farmsteads. Someone, somewhere, must know something of his dad.

This quest leads Paul to pass a group of Stepanerks carrying out some sort of ritual or experiment, and his thoughts return briefly to Mr Step. It’s only when events turn sour that this fortunate encounter brings the odd-looking alien to the rescue. And it’s not just Mr Step who’s looking out for Paul. Beltran, Paul’s boss, thinks he needs to toughen up in order to survive on this planet, and he’s also keen to help with Paul’s father’s problems. This could, finally, lead to some sort of resolution. Well, if only.

Mr Step, and the Stepanerks in general, are such a curious design. An amalgamation of a prawn, a spider, a crab, and a human does indeed make them far more alien than your average TV or movie alien. Personally I’d like to see more alien creations and, by the looks of things, that may well be on the cards for the final issue. We’ll have to see.

Leo and Icar work hard to create a believable frontier planet aesthetic, where lawlessness is a natural byproduct of early settlement. Leo has plenty of form with this sort of thing, and it generates a much greater sense of peril. After all, who’s there to call upon when things go wrong? I’m looking forward to just where we’re going to end up with the fifth and final volume. Judging from Leo’s other work there’s no guarantee we’ll be given all the answers. It’s this awe of the mysteriousness of the universe that makes the books so fascinating in the first place, so I’m definitely intrigued.

And if you liked that: One more book to go and it’s coming soon!