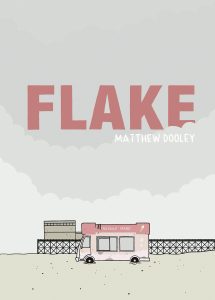 This is cartoonist Matthew Dooley’s first graphic novel and he’s off to a flying start. A quintessentially British tale of the ice cream man, Howard is slightly down-trodden but seemingly content with his lot. The patch once belonged to his dad, although we soon learn that his dad was something of a scoundrel. Now, many years down the line, Howard’s dad’s shenanigans threaten to overwhelm his son, and the business.

Dooley’s visual storytelling, and indeed his drawing style, owe something to the penmanship of Chris Ware, which is no bad thing. The clean, graphical presentation with its sombre, muddy colours, set the scene perfectly, and allow the story to progress at a gentle pace. Characters have time to breathe and react to a situation rather than be bustled on for the sake of the next scenario. If you’ve seen TV’s The Detectorists, well, it’s a bit like that. It also means characters like Jasper, Howard’s friend, are able to shine, with some cracking ongoing gags about a naked calendar and his running of a mountain rescue unit whose mountain has been downgraded to a hill.

Go support a British cartoonist and buy this book– you won’t be disappointed.

And if you liked that: Have a look at Rusty Brown by Chris Ware