You are here: Home › The League Of Extraordinary Gentlemen Vol IV: The Tempest
By Simon Chadwick on December 30, 2019 in Reviews 0

By Moore and O’Neill 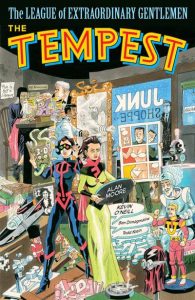 The final volume in Alan Moore and Kev O’Neill’s outstanding tale has now been gathered for our reading pleasure, and what a feast for the ol’ eyeballs it is. I’m not quite sure what anyone outside of the UK will make of it, such is the British-centric nature of much of the content. In fact, the intended readership, or at least those able to get the most from it, would also need to be over a certain age too.

Anyone who has followed Moore’s career will know the industry hasn’t treated him too kindly, and so in an effort to restore the balance each of the six chapters (previously appearing as six individual issues) highlights a British comics creator who was given an equally rum deal by publishers. It sounds like a morose and bitter line to take, but the very nature of the LoEG books, particularly the latter ones, is one of immense fondness for the medium. The publishers may well be painted as the baddies, but the creators and their creations are to be celebrated for the joy they have brought, their inventiveness, and the inspiration they fostered.

Like previous LoEG books, this is a colossal blending of fiction, taking works of literature and bygone comics, with a little TV and movies sprinkled in to season the mix. The resulting scale is unlike anything you’ll have read before, dragging in characters, places and objects from across the fictional spectrum. Often the element Moore has plucked from history is so obscure they are long-forgotten by all but a handful of people. Take Zom of the Zodiac, a one-off appearance in a forgettable 1948 comic. His powers are absurd and yet Moore works him into the narrative brilliantly, to both underscore his point and to celebrate the medium. Throughout there is a distinct air of cynicism about the whole superhero shenanigans, and perhaps rightly so, but at the same time I couldn’t help but feel it was a celebration too. A celebration of the superhero comics Moore grew up on and encouraged him to create his own tales, that regardless of the eventual outcome remains a most special place in his childhood.

This is born out across the chapters, with each issue/chapter styled after a particular comic-style of the past and, while fun is most certainly poked, the attention to detail betrays the fondness for which the medium is held.

As for the plot, you’ll need to have read the previous books to follow it, such is the vastness of scale and characters referenced and revisited. But that would be worth your while. You will, undoubtedly, spend far too much time googling the names of characters and places, which often pushes you down Wikipedia rabbit holes, but that’s all part of the fun.

Clearly this isn’t a book, or even a series, for everyone but, for those that will appreciate it, there is so much richness, nostalgia and detail embedded in every page that Moore and O’Neill deserve a standing ovation for a remarkable epic.

And if you liked that: Jump back to the original two volumes just to compare the growth of ambition.