This article first appeared in Issue 532 of The jester Magazine, July 2019

Cartooning can be a family affair – particularly in America, where at least one cartooning ‘dynasty’ has traversed three generations. Here’s an (almost) A-Z of ‘potted’ biographies of a few cartoonists and their offspring/siblings who have followed in their footsteps. 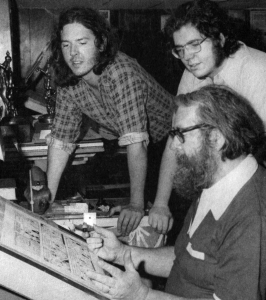 Thomas A ‘Tad’ Dorgan (1877-1929) was a revered sports cartoonist whose drawings were syndicated throughout America. His younger brother Richard W ‘Dick’ Dorgan (1892-1953), also a cartoonist, worked on several features including the strip Colonel Gilfeather, 1930- 32.

John Gallagher (1926-2005) sold his first cartoon to the Saturday Evening Post in 1951 and freelanced for the next 20 years. His brother George Gately Gallagher (1928-2001), who drew under the name George Gately, created the panel feature Heathcliff in 1973 and John joined him working on the feature. The brothers retired in 1998 when their nephew Peter Gallagher took over Heathcliff.

Jack Gibson (1904-1980) was a well-known Australian cartoonist who drew for Man magazine, 1937-74. His son John (1930-2018) adopted the surname of his stepfather, Arne Jensen, and sold his first cartoons to Australian magazines, before coming to England. John Jensen was Pocket Cartoonist for the Birmingham Mail 1951-53, Glasgow Bulletin 1953-56, and Political Cartoonist for the Daily Telegraph 1961-79 also contributing to Punch from 1953.

Alex Graham (1917-1991) created Fred Basset for the Daily Mail in 1963 and drew the strip until his death. Since 1993 his daughter Arran Keith (b.1948) has written the storylines. The strip is now drawn by Michael Martin. 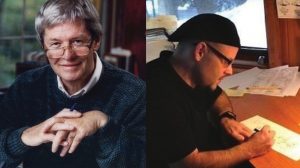 Johnny Hart (1931-2007) created the strip BC which he drew/wrote from 1958 until his death. He also scripted The Wizard of Id which he co-created with Brant Parker in 1964. Since 2007 his grandsons Mason (b.1978) and Mick Mastroianni (b.1982) have produced BC, Mason as cartoonist and writer, Mick as writer. Mason has also drawn The Wizard of Id since 2015. Johnny’s daughter Perri (b.1957) also works on BC as a colourist and letterer. 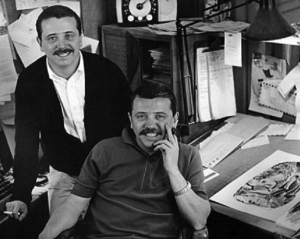 Joe Martin (b.1945) created the strips Mr Boffo, Porterfield, Willy ’n’ Ethel, and Cats With Hands. In 2000 the Guinness Book of World Records recognised him as the world’s most prolific cartoonist with 22,000 cartoons published since 1978. His son Jay Martin (b.1974) created the strip Tommy which ran 1996-98.

Beryl (Antonia) Yeoman (1907-1970) and her brother Harold Underwood Thompson (1911-1996) created cartoons together using the name Anton, contributing to Punch from 1937. During WW2 Antonia continued to produce cartoons as Anton while Harold served in the Royal Navy. After the war they worked together again, contributing to Punch, Lilliput, London Opinion, and Men Only. Their partnership ended in 1949 when Harold decided to pursue other interests. Antonia continued as a cartoonist using the name Anton, her drawings appearing in Tatler, Lilliput, Men Only, New Yorker, Evening Standard, Private Eye and Punch.

Baggage
That Clip Studio … Mannequins .. How Do they Work then?