You are here: Home › Valerian And Laureline Vol 21: The Time Opener
By Simon Chadwick on October 28, 2018 in Reviews 0 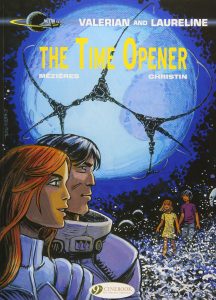 I’ve been trying to avoid anything in the way of spoilers so was rather surprised to learn that this is in fact the final part of the saga, despite there being a volume 22 after this. I’d been anticipating a two book epic to bring everything to a conclusion, but instead it’s all down right here in one volume. Turns out the final book in the series contains a collection of short stories interspersed throughout the saga’s long run.

So the giant stone monoliths known as the Wolochs are streaming forth from the Void and laying waste to everything they come across in the vastness of the universe, destroying civilisations and life in general as they go. It’s all looking extremely desperate but Valerian and Laureline have a plan. It doesn’t require an army or weapons of great destruction but an action that just might reverse the destruction and release the Earth once more. In order for this to be possible it means gathering together a vast cast of characters and revisiting many of the places we’ve seen throughout the previous twenty volumes, entwining story threads and picking up pieces to draw together the conclusion. There’s a lot of this, and so it would be a pointless exercise in starting your Valerian and Laureline reading with this book – far more satisfying to go back to the beginning and revel in the full scale of the story.

As it stands, when the conclusion does come, it’s not quite what I’d hoped it would be. Such was the size of the threat facing the universe then perhaps no other ending was possible, but it does seem to be all over a little too easily. The book itself feels more like a goodbye to the cast rather than addressing the threat. This doesn’t mean it’s not any good, but that it may not fulfil expectations. However, what we need to remember is that this is just a part of the whole, and that the whole is an impressive work of the imagination that will remain an important part of the science fiction and comics mediums for decades to come. Also, although the nature of the conclusion may be wanting, by tipping a nod to so many of the characters and places reminds you what a daring and wide-ranging series this has been.

And, of course, it’s not quite over, with volume 22 still to enjoy. I shall be reading that one shortly.

And if you liked that: Just one more book to complete the series, and it’s out now…