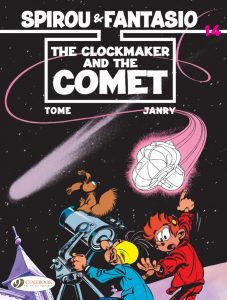 Part of what makes the Spirou and Fantasio books such a pleasurable read is the breadth of their adventures, from dangerous dictatorships to ribald robots. With this new book we get a brilliantly scripted and exquisitely drawn time travel tale complete with a future descendent of the Count de Champignac and the inevitable paradox.

The contemporary Count is leaving Spirou and Fantasio to keep an eye on his estate, and he’s suggested they might like to observe a comet that’s due to pass that evening. But the comet is accompanied by a strange craft, utilising the unusual properties of the comet to make a time-jump, but what’s really notable is that the pilot of the craft appears to be the Count and he has no knowledge of either of his two friends. Once they’ve straightened out quite why this is the case the Count’s descendant, known as the Clockmaker, announces he intends to travel to the jungles of Palombia to retrieve vital seeds before the brief window of the comet’s passing closes, along with his ability to return to his own time. Unfortunately the Clockmaker’s time machine draws attention to itself so they repeatedly cross paths with other curious parties and barely stay one step ahead of two time-travelling agents intent on catching up with the Count’s descendent.

So plenty going on there then, and what’s more there’s quite a nice and cleverly introduced twist half way through. The creators also toy dangerously with the ‘it was all a dream’ trope but fortunately it’s for a little misdirection rather than a way to tie up the ending.

I’m glad Cinebook are choosing to alternate between Tome and Janry’s Spirou and Fantasio books and Franquin’s earlier works. The two sit very comfortably alongside one another, each with their own individual merits to promote them. Also, you could pretty much jump right in with any of the books to date. The books stand up on their own rather than following a developing narrative, and should their be any gaps in your knowledge as to who is who or why anyone choses to act in the manner in which they do then it’s rather fun to plug those gaps as you dive deeper into the stories.

And if you liked that: Volume 15 is another Franquin book! Looking forward to it.