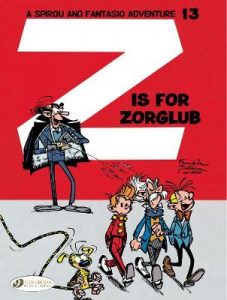 This one’s a lot of fun. A crazed, misguided scientist attempts to abduct Fantasio with a hairdryer and a driverless car. After this fails he then tries it on Spirou with a purpose, it seems, to simply get a message delivered to the Count of Champignac. It is a display of power, and one intended to intimidate the Count, sent by someone the Count knew from back when he was a student. This student, Zorglub, has a mighty chip on his shoulder, and now intends to use his power and creations to bring every planet in the solar system under his domain. But with so much powerful technology under his belt it’s not immediately obvious if the Count, Spirou and Fantasio will stand a chance in stopping him.

This one rattles along, with a brilliantly farcical villain full of his own self-importance and mild-controlled minions to do his bidding. There’s also the excellent Marsupilami to lend a hand when an angry mob turn up to smash the Count’s life work.With his mind control technology and his penchant for world domination, Zorglub should be a formidable villain, but ultimately his posturing, varied monogrammed vehicles and displays of outlandish technology are a screen for an insecure personality who can’t quite draw all his machinations together, which means Spirou and Fantasio have something to work with.

Some great comedic beats throughout the book, all brought to life by the lively animated illustrations of Franquin that adds an energy to every panel of every page. Not enough UK readers know about Spirou and Fantasio and the time really is ripe for a change, so if you’ve not yet tried them, or know someone that might enjoy them, you wouldn’t be doing badly by starting with this book.

And if you liked that: See more Spirou and Fantasio books at www.cinebook.com